Billy Connolly on the eve of his 80th birthday shared the secret of his success in the comedy genre: “It’s like a drug, more exciting than intimacy …”

It was the precise moment a comedy legend was born. Sir Billy Connolly has revealed the exact second – when a singing gig went wrong – that he discovered his ambition in life was to make people laugh. The Scot, who is just days away from his 80th birthday, has described how, as a young man, he was due to perform a song but, having started to sing, realised he had forgotten the words.

Instead, he improvised a monologue explaining the story behind the song – inadvertently leaving the audience in stitches. 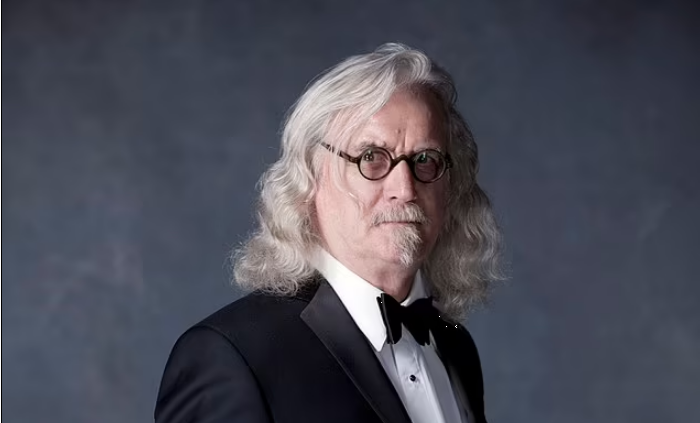 Sir Billy discussed the birth of his career as a funnyman during a new comedy masterclass in which he teaches the art of stand-up.

Despite his age and well-documented health problems, the Big Yin, who enters his ninth decade on Thursday, has teamed up with the BBC’s Maestro subscription platform to deliver his tips on how to be funny for budding comics.

Sir Billy, who was diagnosed with Parkinson’s disease a decade ago, used the platform to share his expert knowledge on the subject.

And in the fascinating series of video lessons –lasting almost three hours in total – he described the eureka moment when he accidentally left the crowd howling with laughter. 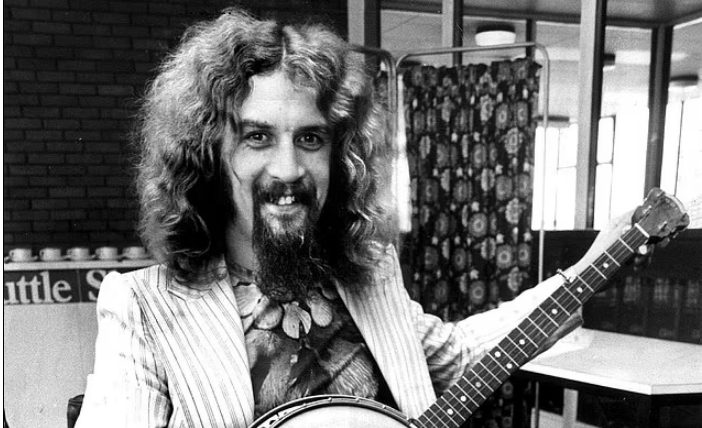 He explained how he was performing in Paisley as a banjo player and folk singer when he forgot the words to a ballad.

The Glasgow-born comedian said: ‘I was a welder and then I became a banjo player. I went to sing a song called St Brendan’s Isle. It’s about monks who lived in Ireland in the 14th Century. I was singing it and I lost it in the middle. I completely forgot the words and I didn’t know what to do and stopped playing. I told the audience I’ve forgotten the words. They started to laugh.

‘I said it’s about monks who lived in Ireland and they built these leather boats and the more I explained it the more they laughed until they were in hysterics and I went down a storm. I thought that was brilliant. Brilliant.

‘I liked the sound of that. I liked how that felt. The feeling was like a drug. It was the first time I had improvised. I didn’t know I was doing it.’ 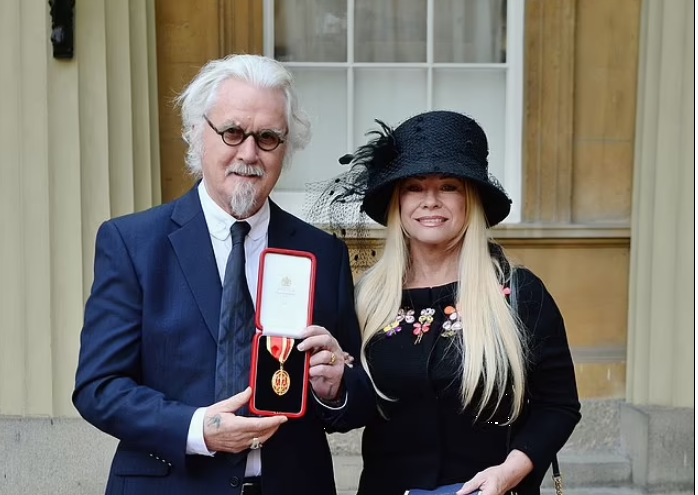 He added: ‘I went back to being a banjo player and then the word got out that I was funny and I read in a newspaper that I was a comedian and it took me by surprise, genuinely. It said “banjo-playing comedian Billy Connolly”.

‘I thought I was a folk singer and I was delighted and I think that’s the way you should come into comedy – by mistake.’

Sir Billy recently announced he has retired from performing stand-up because his Parkinson’s disease is too advanced.

But throughout the masterclass he encouraged others to pick up the reins and believes comedians are needed more than ever. 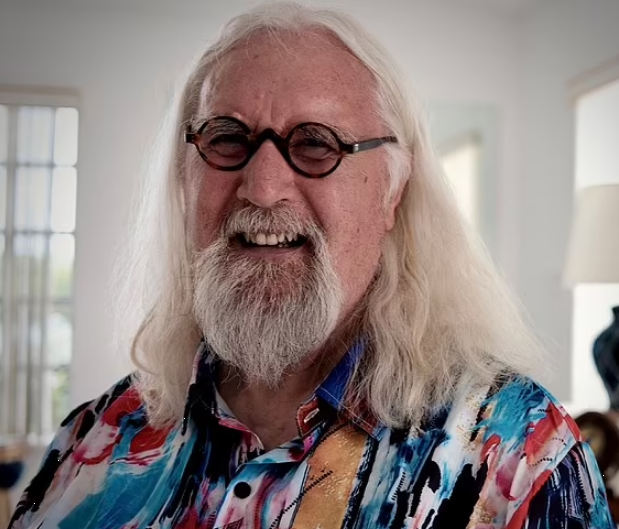 In the online classes, he said: ‘People need a good laugh. They’re surrounded by politicians and soldiers and all that and it’s deadly, trying to feed and clothe their children. They’re looking to you to brighten it up and to do it is such a pleasure.’

After a spell in the folk trio The Humblebums, with bandmates Gerry Rafferty and Tam Harvey, he left the band in 1974.

Two years earlier Sir Billy had made his theatrical debut as a comedian at The Cottage theatre in Cumbernauld.

He said: ‘The thing about comedy is you shouldn’t be forced into it. You should find yourself in it by mistake. You should be acting and suddenly discover you’re good at being funny.’ 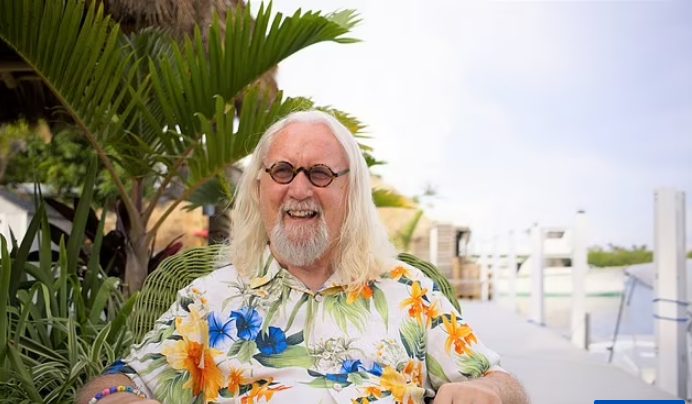 Describing the feeling of a good audience reaction, Sir Billy added: ‘It’s a joy. You’re headed for something that’s more fun than sex.

‘I’m a man boy. I’ve never become a man. I’m a child and I have childish desires. I don’t think it has ever stopped me being a comedian or made me any less a comedian.’

In the masterclass lessons, Sir Billy also revealed it was a Glasgow-based firm that came up with the idea for his famous banana wellington boots, worn during a major tour of UK theatres in the 1970s.

‘I thought I would get skintight trousers and big pink furry boots, but they got in touch with me and said, “How about bananas? Why don’t you wear bananas?”’ he said. 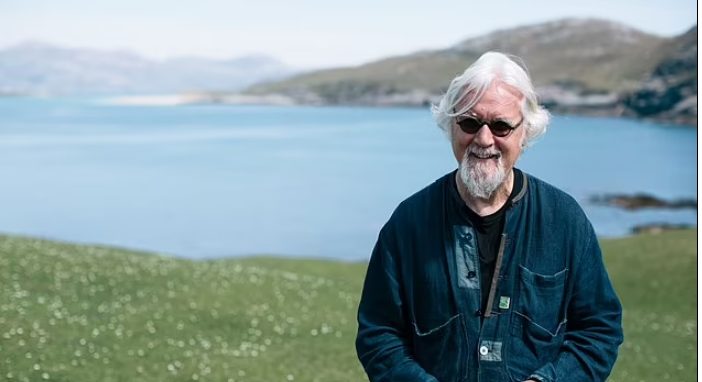 ‘They sent me one and said, “What do you think?” I said, “I love it.” They said, “We’ll start work on the other one. It won’t be identical but bananas never are”.’

His advice is to learn and be influenced by comic greats of the past and to treat comedy like surfing by starting to talk before the audience has stopped laughing.

‘It makes another wave and off you go,’ he said. ‘You surf the waves together. It’s a joy.

‘Write stuff down but don’t be chained to it. Listen to your mind. It’ll suggest things on its own when you are in the middle of talking about something else. Make notes on where you died and don’t do it again. Know your audience.’

The star, who also appeared on the big screen in films including 1993’s Indecent Proposal, 1997’s Mrs Brown and 2003’s The Last Samurai, officially retired from comedy in 2018.

In the masterclass he explained his motivation, saying: ‘I always wanted to be a somebody. A rock star would have done. A folk singer would have done. It is a desire to communicate, to be popular, to get a girlfriend, to make love to somebody, to be somebody.

‘It was one of the few ways to become somebody apart from working hard at school and going to university. That was out of the question.’

He also revealed he once punched a heckler who wouldn’t shut up during one of his performances.

Sir Billy said: ‘Dealing with hecklers is a problem because sometimes they’re quite nice people and you attack them too strong and destroy the atmosphere in the room. I’m guilty of this.

‘I hate hecklers. I’m guilty of treating them too strongly and I have hit one. I got to the position of violence. I was playing the banjo and singing songs and he butted in.

‘I went down and punched him. I found out later he was one of the treasurers. I didn’t get paid.’

The incident, he explained, was repeated at shows he performed throughout Britain in his early years.

In the masterclass he said: ‘When I first toured in the concert halls of Britain I used to get loads of hecklers. I’d get people singing Scottish songs. It all went haywire for a while.

‘Alcohol plays a huge bit in the heckler’s life. Booze is to blame. That’s why I don’t have intervals in my shows.’

Among his tips for those looking to try their hand at comedy is to steer clear of alcohol and drugs.

Sir Billy added: ‘Drugs and alcohol should be avoided if you’re going to be a good comedian. I’ve never been drunk on stage and I’ve never been stoned on stage. It’s a road paved for losers. It’ll make your material horrible. You’ll do it all wrong and you’ll think you’ve done great.’

Another one of the Big Yin’s tips for budding comics is to learn from parts of their routine that don’t work.

He said: ‘I remember once in Hull I told a story about Hitler and I died a death. I learned never to do it again even though it was funny.’

He added: ‘I love my fans and liked them from the beginning because I was kind of unfashionable at the beginning. I didn’t resemble anyone else and it was difficult getting an audience together. But once they came with me it was huge and very worthwhile.’

These spouses decided in a very original way to celebrate half a century of marriage. You will definitely like it too
Interesting 0 20