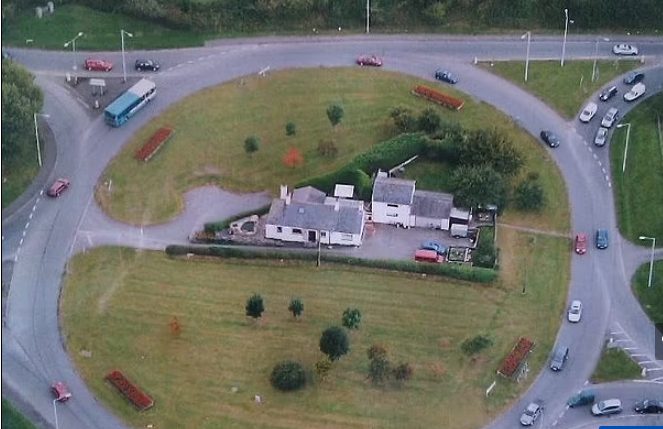 ‘I’ve lived in a bungalow in the middle of a traffic circle for the last 40 years – and the only way you’ll get me out of here is in a coffin’, says English man who LOVES his home
A family from Wales who have been living in the middle of a busy roundabout for more than 40 years has revealed the unusual location ‘doesn’t bother’ them, but it’s a nightmare trying to arrange deliveries as drivers can’t find their house.

Clwyd Howatson, 64, and his wife Anwen, 60, live in a bungalow in the middle of a roundabout on the Denbigh A525 bypass in Denbighshire. 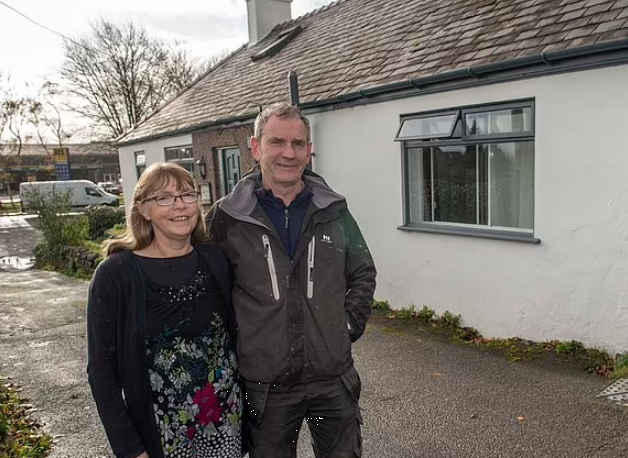 Their home has been surrounded by five junctions ever since the bypass in the picturesque Vale of Clwyd in North Wales was built.

Mr Howatson, a builder and electrician from a big family, has lived on the roundabout over 40 years, and says it is ‘almost all I know’, adding his family plan to remain there for many years to come – despite issues with deliveries and potential crashes.

The family have become such a staple in the area that it has become known as ‘Howatson Corner’ – as their neighbours across the road are also family members.

As they insisted they have no plans to move, the couple joked: ‘We will never get Clwyd out of here unless in his coffin.’

Speaking today, Mr Howatson said: ’62 years I have lived here and there are many happy memories. Before, we had lived across the road. 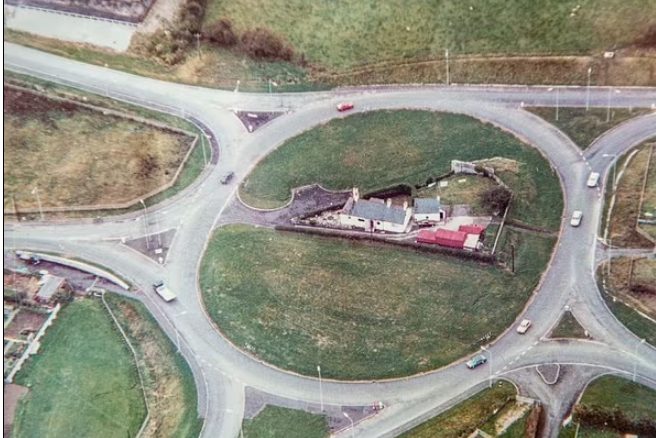 ‘We get the odd accident and loads of drivers went the wrong way when the roundabout first opened but it happens rarely now.

‘We love the view of the mountains and we have no neighbours encroaching on us.’

The white house sits in the middle of the large roundabout, with a driveway that leads directly onto the road at one point.

Until the 1960s there was a railway nearby. Now the four-bedroom bungalow is passed daily by thousands of motorists using the scenic A525 route which heads from the coast. 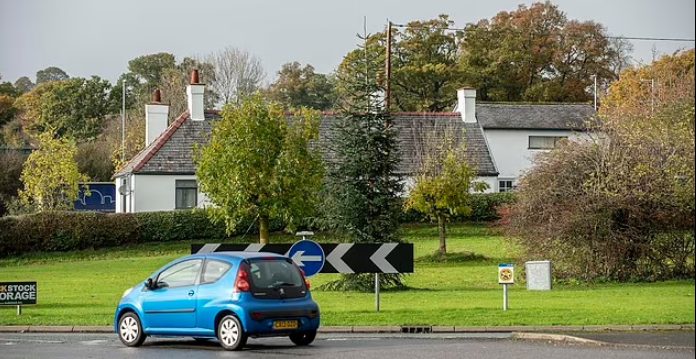 Mrs Howatson, 60, a cleaner, said today: ‘You get used to the noise. I don’t hear the cars anymore.

‘The two main questions we get asked are “how do you get off the roundabout and is it noisy?” But the traffic is only going one way so it’s not that difficult to get out.’

Grandfather Mr Howatson, who keeps a pony and hens, said: ‘The only disadvantage is we have to cross the road to our field to reach them.

However, he added: ‘It’s like living anywhere else on the side of a busy road. It’s just it’s all the way around us. But it’s a lot noisier next to the A55 dual carriageway. At least here motorists have to slow.’ 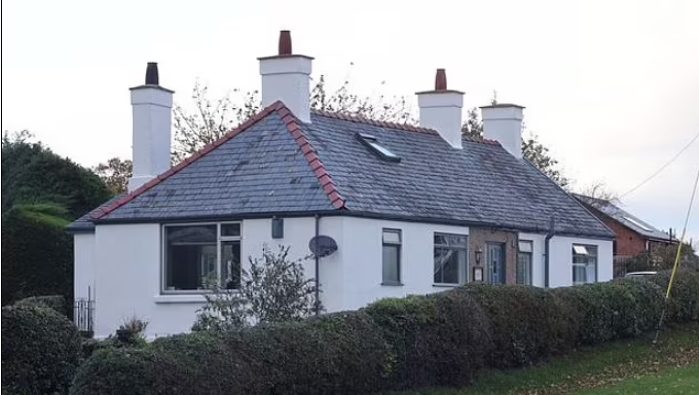 His parents moved to the bungalow in 1960 – before there was a roundabout or bypass through their smallholding.

He also boasted about the ‘spectacular’ views from the middle of the roundabout – with no other houses or buildings close enough to block the Welsh scenery – but said he and his wife had perhaps started to ‘take it for granted’.

It was his relatives, David John and Eirian Howatson, who first moved into the bungalow in 1960, which was then located in the middle of a small holding with no bypass in sight.

But in the late 1970s plans for the roundabout following the bypass’ completion were submitted, and building work began.

David John and Eirian were told they could not build another bungalow on their small holding and they refused to uproot their family, so stayed put as the roundabout was built around them.

The roundabout was completed in 1980 by which time David John had sadly passed away. 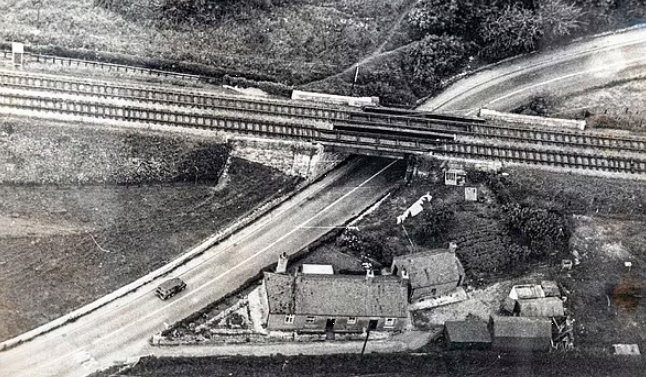 Now in 2022, the bungalow remains in the Howatson family’s hands – and is a hive of activity with seven children and 12 grandchildren who visit regularly.

Mr Howatson said living on the roundabout is a great conversation starter, and people always tend to ask the same questions: ‘The first is always: “How do you get to your house?” which is fairly self-explanatory with the drive at the bottom.’

He added that the noise doesn’t impact their family life too much.

‘We have double glazing so it’s not something that bothers us and the road only gets really busy at peak times which is only a few times a day.

‘Getting off the roundabout on the other hand can be a bit of a challenge. 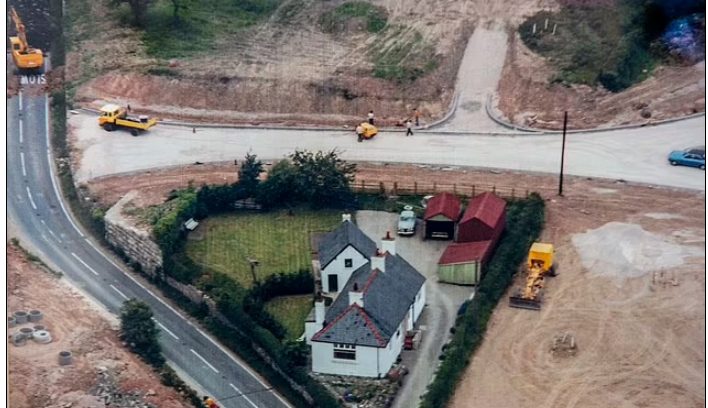 ‘When people are on a roundabout they don’t expect someone to come out of the roundabout itself so we do get a few double-takes.

‘It can be a bit awkward as well if someone lets you go because someone could be coming up on the other lane, but we don’t really have any issues with it, we just tend to wait until it’s a bit quieter.’

Arranging deliveries is a more complex challenge, however, being far more complex as drivers initially miss that the Howatson’s home is on the roundabout, and not on a nearby road. 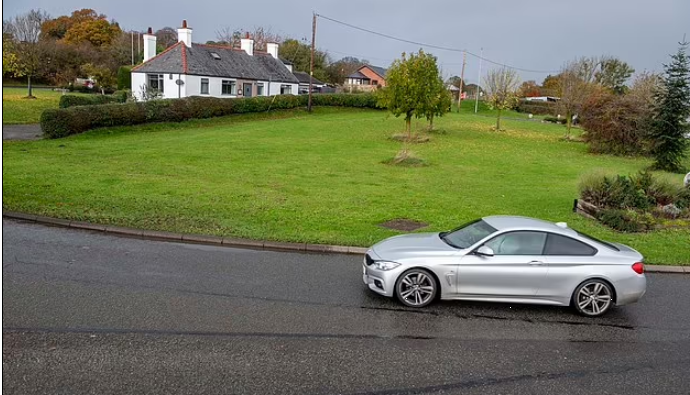 Mr Howatson said: ‘We share the same postcode as the houses around us so it can take a while for drivers to realise the house is on the roundabout if they’ve not been before.

‘They always sound a bit dubious until they get here.’

As for crashes, he said he has not seen any serious incidents in the 40 years he has lived there, but added when the roundabout was first built some people would go around it the wrong way.

Interesting 0 79
Kaya showed off her toned figure in shorts. The girl went for a walk

These spouses decided in a very original way to celebrate half a century of marriage. You will definitely like it too
Interesting 0 19

Kaya showed off her toned figure in shorts. The girl went for a walk with a friend and a dog
Interesting 0 79