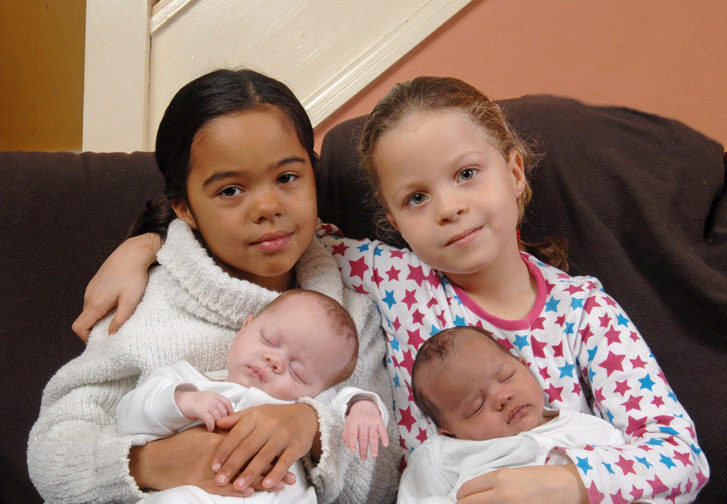 Only twins are born in this family, but they always belong to different races. natural miracle

Science is full of miracles that ordinary people are not aware of. For example, twin babies born to mixed-race couples have a chance of having different skin colors. In this article, we would like to share the story of a family where a miracle happened twice, and 2 pairs of biracial twins were born.

A mixed-race British couple, Dean Durrant and Alison Spooner, made a sensational discovery 2 times in a row. In 2001, they welcomed biracial twins Hayleigh and Lauren, who had different skin tones and eye colors. Hayleigh got her father’s darker skin and Lauren looked more like their mother with blue eyes and fair skin.

However, the couple got another marvelous gift years later: in 2008 they welcomed another set of twin sisters, Miya and Leah, who look different from one another. Even the father himself was surprised once the baby girls were born, saying, “There’s no easy way to explain it all. I’m still in shock myself.” Nobody expected this miracle to happen again for a second time.

No one believes the girls are twins.

The older set of sisters admit that it’s hard for people to believe they are twins. Some people are just shocked, and others may even think it’s a lie. So most of the time, they assume Hayleigh and Lauren are just best friends rather than twins.

But such reactions are understandable, as rare phenomena like this happen only once in 500,000 cases. Because of this, the girls never get bored of people’s stunned reactions. In fact, they like to take their passports out and watch the surprised facial expressions.

On the other hand, people aren’t necessarily mistaken when they think that Hayleigh and Lauren are besties. The girls share more than just a biological bond — they’re also really close in every way, apart from their different appearances. The twins have shared the same room since they were born and cannot imagine their lives without each other. For the pair, having a twin means having a true best friend.

The family was included in the Guinness World Records.

With the birth of the younger sisters, the family was brought into the Guinness World Records. Such a phenomenon is even rarer and now truly unique because they remain the only family in the world with 2 sets of biracial twins.

The probability of the birth of 2 sets of twins with different skin colors from the same parents is equal to 1:1,000,000. There aren’t even any statistics describing it, although its frequency is likely to increase over the years due to the growing number of racially mixed marriages.

The mother of the girls, Alison, admits that the younger twins always idolize the older ones and try to copy them in many ways. For her, it’s like raising 2 mini-mes. For Miya and Leah, their older sisters are true role models, and they dream of being like them when they grow up.

How a person can give birth to biracial twins

Of course, you may ask how this can actually happen. Well, it’s believed that a mixture of several genes determines the color of a person’s skin. For a couple whose representatives are people of different races, there is a chance of giving birth to a Caucasian or Black child, depending on their dominant and recessive genes. Non-identical twins can be born with different skin colors when 2 separate eggs are fertilized by 2 sperm, which means that each of the unborn children has a different genetic inheritance from their parents.

Did you already know that twins can be biracial? What other “genetic” miracles have you heard of?