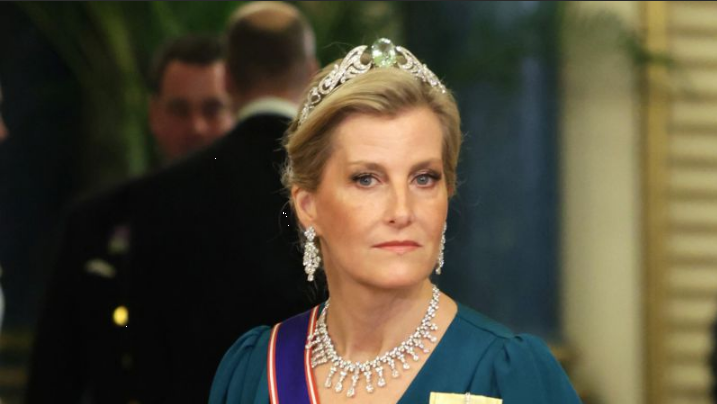 The Countess of Wessex sparkled in diamonds as she arrived at the lavish State Banquet held in honour of the visiting South African president.

Mother-of-two Sophie, 57, and her husband Prince Edward, 58, joined senior members of the royal family for the occasion at Buckingham Palace, the first of its kind in three years. 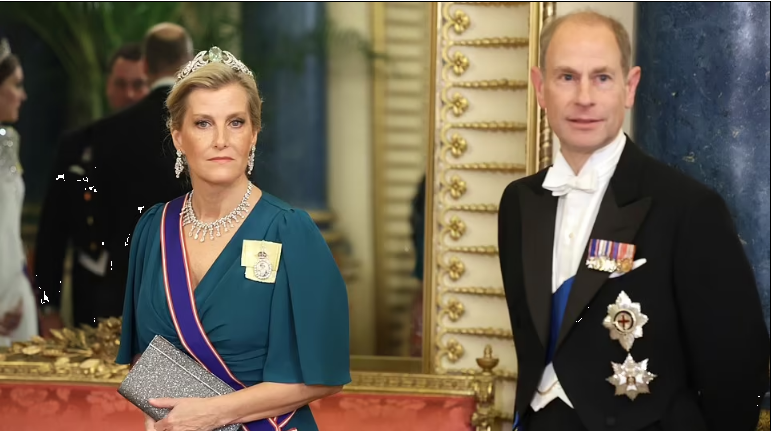 The late Queen’s daughter-in-law looked elegantly stylish in an emerald gown and dazzled in The Wessex Aquamarine Necklace Tiara and matching drop earrings for the event.

Other members of the Firm attending the opulent event included the Queen Consort Camilla, the Prince and Princess of Wales, the Duke and Duchess of Gloucester and the Duke of Kent. 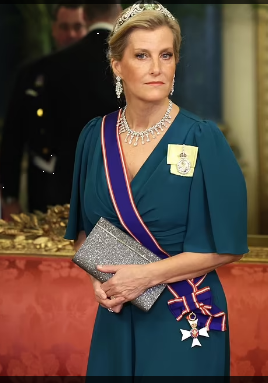 King Charles III treated South African president Cyril Ramaphosa, whose state visit to the UK was in the planning before Queen Elizabeth II’s death, to a fine menu of stuffed Windsor pheasant and grilled brill with wild mushrooms tonight.

Sophie was wearing The Wessex Aquamarine Necklace Tiara, which she has donned at numerous occasions previously. The tiara can also be transformed into a necklace, and is reported to be worth £1 million.

The royal has made significant use of the beautiful tiara over the years. On June 13, 2015, at the wedding of Prince Carl Philip of Sweden, Sophie wore all aquamarine. 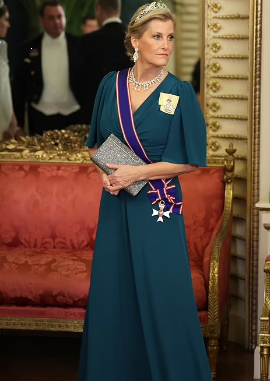 The Countess of Wessex first debuted the aquamarine tiara at Prince Albert of Monaco’s enthronement celebrations in Monte Carlo on November 19, 2005. The tiara has a large central aquamarine set among a diamond scroll frame.

While Prince Edwards looked typically smart in a tailored black suit which he paired with a white shirt.

It comes as the Princess of Wales dazzled in diamonds tonight as she also attended the luxurious State Banquet. 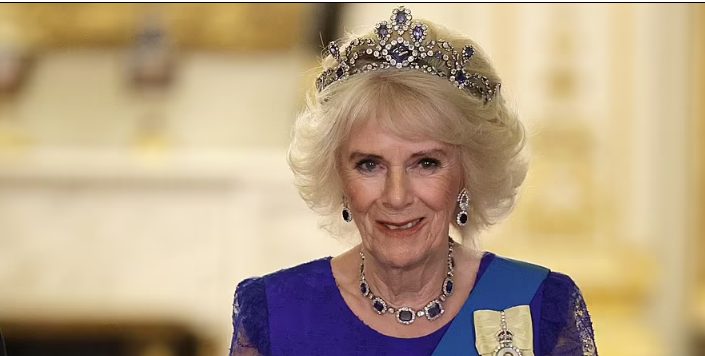 The wife of Prince Edward held onto a glitter silver Jimmy Choo Cayla clutch, which paired perfectly with her tiara and diamond necklace. 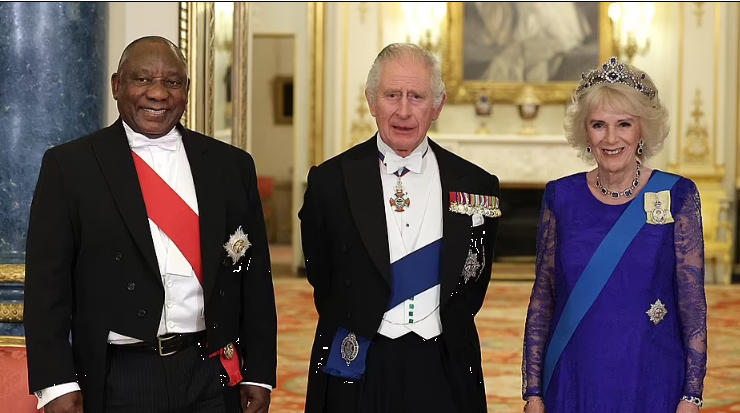 The necklace belonged to her mother-in-law, Queen Elizabeth II, whilst her diamond earrings were worn by the Princess of Wales in 2019 when she attended the Diplomatic Corps.

Charles treated South African president Cyril Ramaphosa, whose state visit to the UK was in the planning before Queen Elizabeth II’s death, to a fine menu of stuffed Windsor pheasant and grilled brill with wild mushrooms tonight. 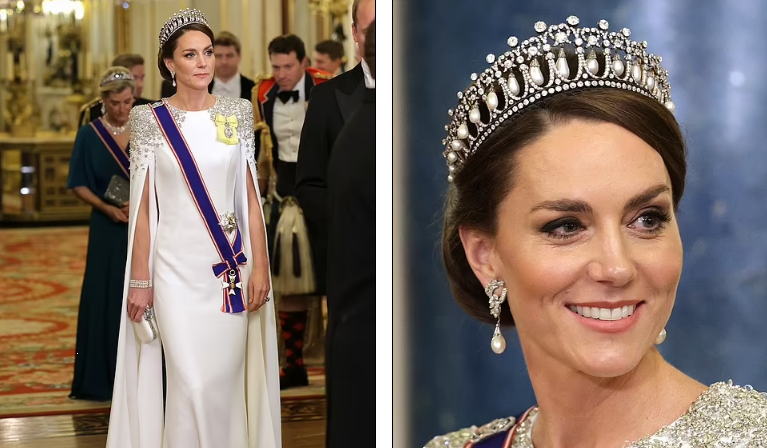 Mr Ramaphosa was greeted by more than 1,000 soldiers, 230 horses, seven military bands and two state coaches earlier today – before being an honoured guest at the State Banquet held by the King, Queen Consort and other members of the Royal Family. 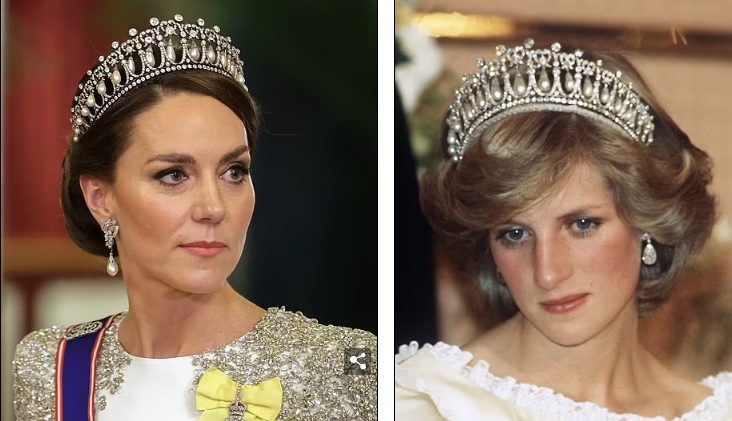 It is a departure from the banquets of the late Queen Elizabeth II, who often favoured Balmoral venison or lamb from one of the other royal estates when hosting foreign dignitaries.

The sides included a selection of assorted Chantenay carrots, kale with roasted butternut squash, braised fondant potatoes and salad. Iced Vanilla Parfait with Caramelised Apples or coffee and bite-sized confectionery were the options for dessert. 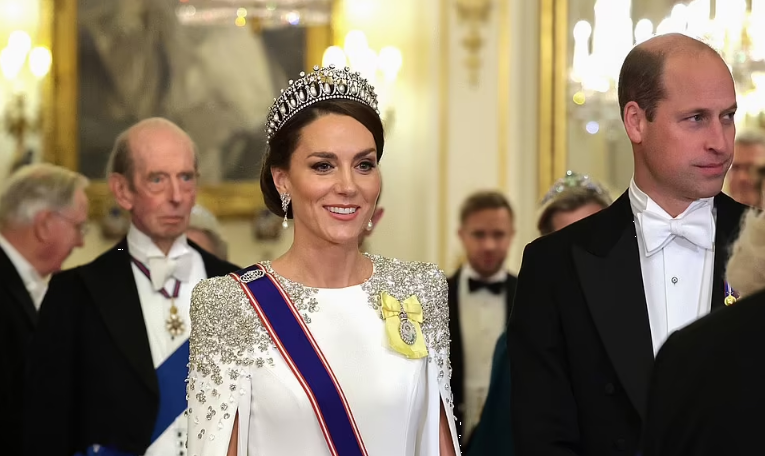 There are wines on offer to accompany the luxurious food, including a Château Feytit-Clinet, Pomerol 2000 that tastes of ‘melted liquorish, cherries and earth’, plus £75 Taylor’s Vintage Port 1983.

Others include Ridgeview Blanc de Blancs 2016, an English sparkling wine that goes at £60 a bottle, a £77 Chassagne-Montrachet 1er Cru, a Morgeot, Clos de la Chapelle, Domaine Duc de Magenta 2014 which goes for £61 and Château Rieussec 1er Grand Cru Classé Sauternes 2007 which is £55

Interesting 0 19
The child, whose photo everyone knows, is completely healthy and returned to normal life,
Last news

This woman can’t buy her kids Christmas presents from Santa: “We’ll have to tell them the truth that there’s no Santa”
Interesting 0 41