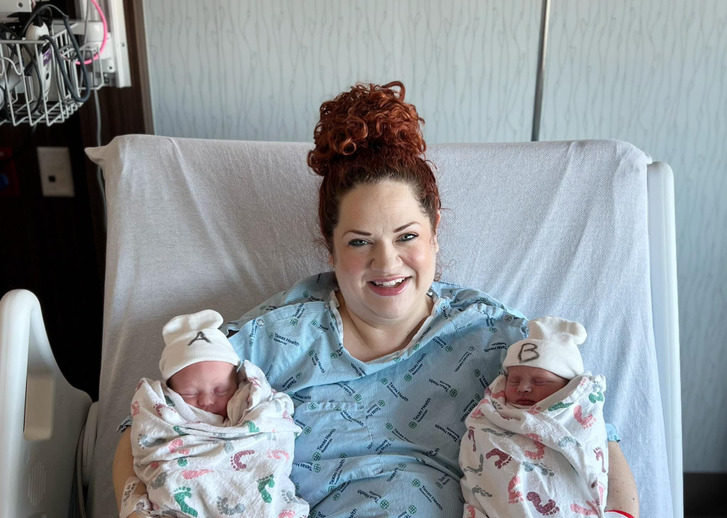 These kids are twins, although they were born in different years. That’s how

Babies are a marvel of life, improving our lives and making us grateful for this blessing. They bring a wide range of emotions into our lives and will surely keep their parents busy. This counts double if a mother gives birth to twins, as they’re welcoming 2 lives at once. In today’s story, Kali and Cliff Scott have been gifted with their baby girls, but the real miracle was receiving them minutes apart, just as the New Year dawned.

They welcomed their babies before the delivery date.

Kali and Cliff were over the moon when they got to welcome 2 baby girls into their lives and experience life with twins. After all, having twins may be the most wonderful and thrilling experience ever. But it can also be difficult and draining, particularly for new parents. Even so, the couple was more than willing to accept these hardships and have their lives entirely flipped upside down for the love of these new “lights.”

Babies can always take us by surprise in the most remarkable ways and do things entirely unexpected. Just like that, the couple’s baby daughters arrived suddenly. Even though they were getting set to see them very soon, Kali ended up going into labor at the most unpredictable moment. Indeed,

Annie and Effie arrived approximately a week and a half early, but “everything went pretty well,” according to the mother, and “they both came out healthy and happy and weighing 5.5 pounds.”

For the couple, the most remarkable aspect of their story was not going into labor before the due date or delivering on the night of New Year’s Eve 2022. The unforeseen event was that their twins were born on different years and days, something that is not common at all.

The birth of Kali and Cliff’s twins was a watershed moment; the couple had daughter Annie Jo at 11:55 p.m. on New Year’s Eve, making her the year’s final baby born at Texas Health Presbyterian Hospital, Denton. Then, just a few minutes later, a little after midnight, their daughter, Effie Rose, came into the world at 12:01 a.m., becoming the hospital’s first infant born in 2023.

“I love it,” the new mom said shortly after welcoming her 2 newborn girls. “I think it’s hilarious and just super fun,” she added later. Annie and Effie arrived earthside in the most unconventional and spectacular way, giving joy not only to their family but also to the medical team that was present to celebrate the couple’s birth and the start of the New Year.

Once their story went viral, Kali also got honest about their thoughts before welcoming their babies, saying, “We had kind of joked, like, ’Wouldn’t it be funny if…’ with the holiday and New Year’s Eve over the weekend,” then continuing, “It turned out that was more of a possibility than we realized.”

They wanted their children to be unique, and they got it.
As parents, we all want the best for our kids, with good health and secure development, but we also want them to grow into confident individuals. Since their twins have already entered the world and established their identity as one-of-a-kind kids, Kali and Cliff don’t have to worry much about these things.

“You always still want to make sure they have their own individual personality and know that they are special and unique,” their mom said. “One will always get the glitter and confetti of New Year’s Eve, and one gets to kick it off with a brand-new year on New Year’s Day.”

Many parents of twins feel an enormous responsibility to raise 2 well-rounded individuals, each with their own particular personality and attributes. However, for these 2 new parents, the coincidental occasion is a blessing in disguise, as the daughters may now celebrate their birthdays on separate days.

Annie and Effie have warmed the hearts of everyone who has read about their birth, and their parents have decided to share their story so that everyone may see how incredible their young ones are. People from all around congratulated the pair who stated, “Cliff and I are so proud to introduce Annie Jo and Effie Rose Scott!” and added, “We’re just so excited for this adventure!”

What’s the most incredible birth story you’ve heard? Were you born during a particularly special time of year?