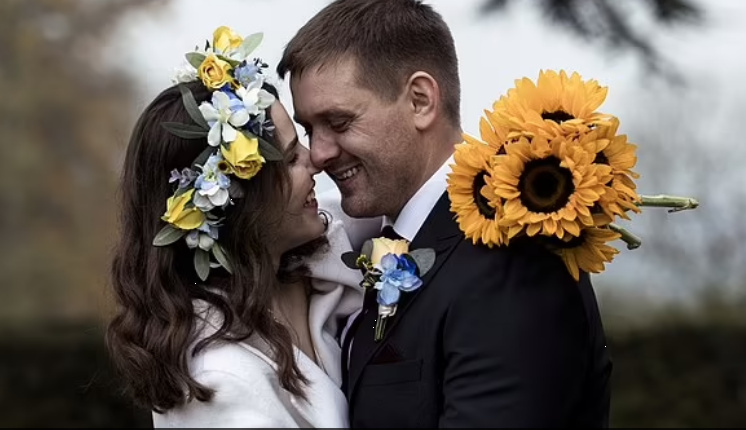 This Ukrainian couple in love arranged a wedding in England. Around they arranged all the photos of relatives who could not come to the event

A couple from Ukraine got married in the UK – in a touching ceremony surrounded by photos of friends and family who couldn’t be there in person – after the bride fled her war-torn home.

Following an impromptu meeting with a planning expert, Maria Bilyk, 23, and Vitalij Melynik, 27, tied the knot after maintaining a long-distance relationship between the two countries since 2019, artfully placing portraits of loved ones on chairs. 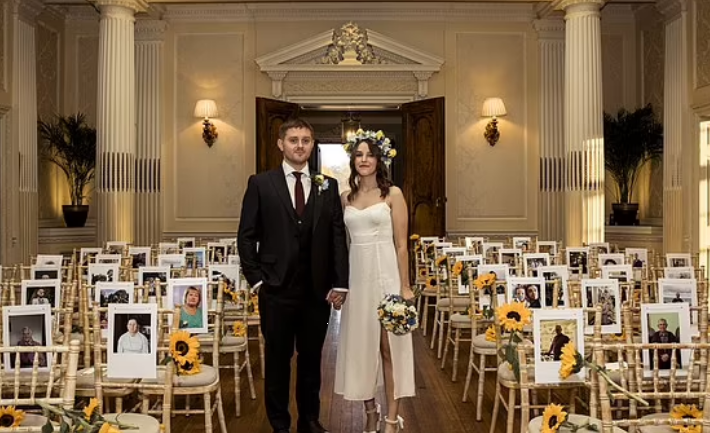 The wedding was originally set to take place in Lviv earlier this summer – after Vitalij, who has lived in the UK for the better part of a decade – proposed during a surprise visit to Ukraine in December 2021.

But after the war broke out in February, when missiles rained from the sky, tanks rolled across the border from Belarus and masses of attack helicopters swarmed on Kiev after Vladimir Putin personally gave the order to attack, their plans were put on hold as Maria was forced to flee.

Vitalij and his mother had even been due to visit Ukraine so they could meet Maria’s parents and plan the wedding, but the Russian invasion came just one day before their flight. 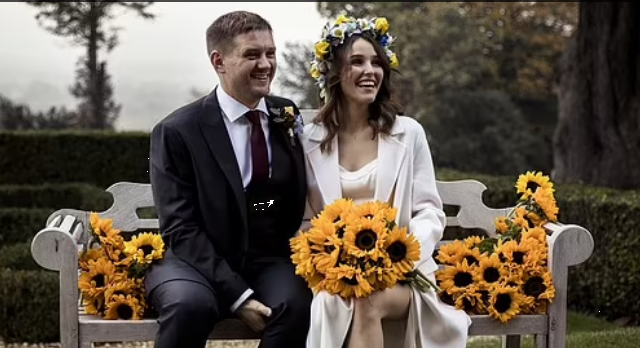 Saying goodbye to her mother and sister – who chose to stay behind – Maria left Lviv to avoid mass shelling and, after an arduous wait, crossed the Polish border into Warsaw.

After a three-week wait, she got a visa to get into the UK, meaning she could finally be reunited with Vitalij. The happy couple are now settled in Feltham, west London together and as of November 14 are husband and wife.

Although the pair’s plans for a big, ‘magical’ church wedding back in Ukraine were halted, Maria said it was still ‘really special’ to have had the moving ceremony in the UK. 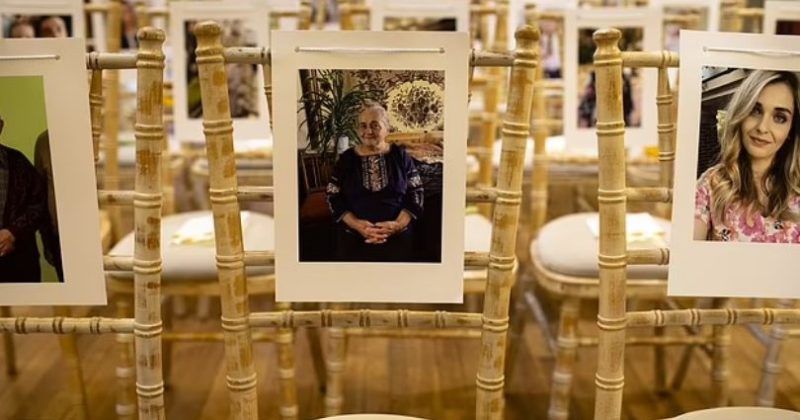 ‘Now, the only thing we really want is for the war to finish,’ she added. ‘And for us to celebrate a big wedding where we could invite as many people as possible!’

Maria – who took on work as a cleaner once in the UK – found herself working at the house of Hamish Shephard, the founder of Bridebook, a wedding planning app.

With its help, the newlyweds completed the legal work required to secure their dream day at Hedsor House, a mansion in Buckinghamshire. 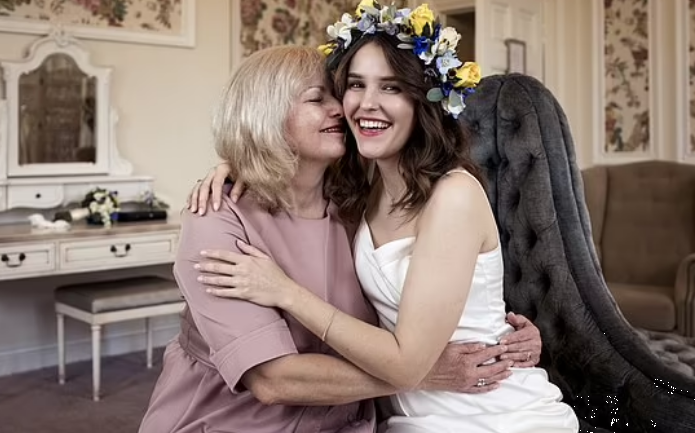 The ceremony took place with just a handful of guests, including both Maria and Vitalij’s mothers. Their fathers were unable to leave Ukraine however due to their age.

Each seat – adorned by sunflowers – featured a picture of a wedding guest they had hoped would attend.

The menu meanwhile was created by British caterers Goose and Berry and included Ukrainian canapes.

‘My favourite part of a wedding was an actual ceremony. It was a really special moment,’ Maria said. ‘We were just holding our hands and looking in each other’s eyes and had to make our vows. The things that the Registrar was saying were really touching!’ 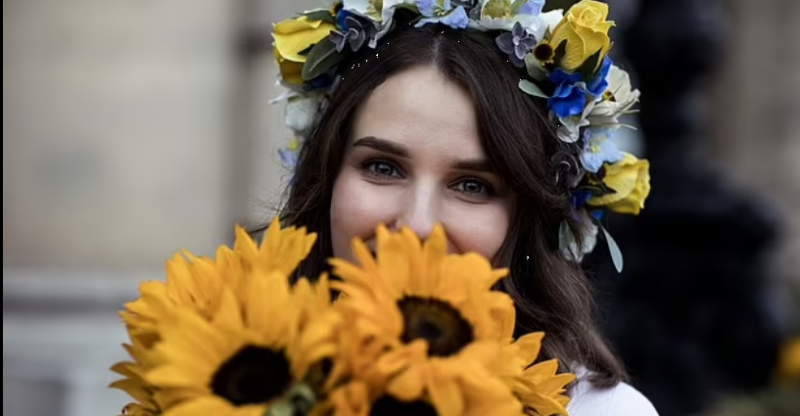 The Bridebook team reached out to its network of suppliers to make the day happen, as some came forward and offered their services for free to help the couple.

‘It was honestly really special and amazing,’ Vitalij said. ‘Everyone was so friendly, so much kindness and so much support. Everyone did an amazing job, they made the hall look fantastic with a lot of flowers.

‘The things (Hamish) has done for us, all of these ideas and everything, it was just great. Something you won’t see every day for sure.’ 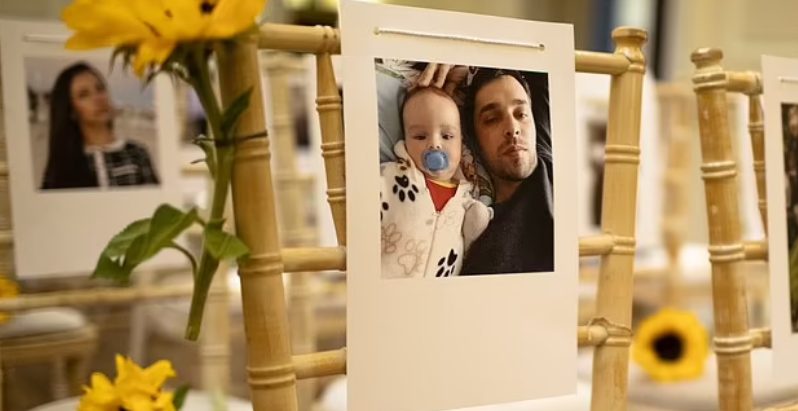 Meanwhile the app founder described the endeavour as ‘the most incredible day’ and praised the response of the wedding suppliers who made it possible.

Speaking candidly about her harrowing escape from Lviv to be reunited with her fiancé, Maria detailed spending more than 24 hours of queuing at the checkpoint before she could finally cross the Polish border the following morning.

‘It was horrifying as I didn’t know what was going to happen in Ukraine ,’ she admitted. ‘There were explosions near my home.’

Maria explained that she decided to leave because of Vitalij – but her mother and sister chose to stay because they didn’t want to leave their husbands behind.

She revealed ‘feeling alone in that way’, but couldn’t stay in Ukraine not knowing if she would ever be able to see her now-husband again. Hence, the three-week trek to the UK began.

Vitalij met Maria in Warsaw, where she was waiting for a visa, for a while – but the bride had to stay with a lady she recognised from her village after her fiancé had to return to his work as a gardener.

She said the visa centre was ‘chaotic’ and full of people, as people tried to cut in line to apply for a visa. 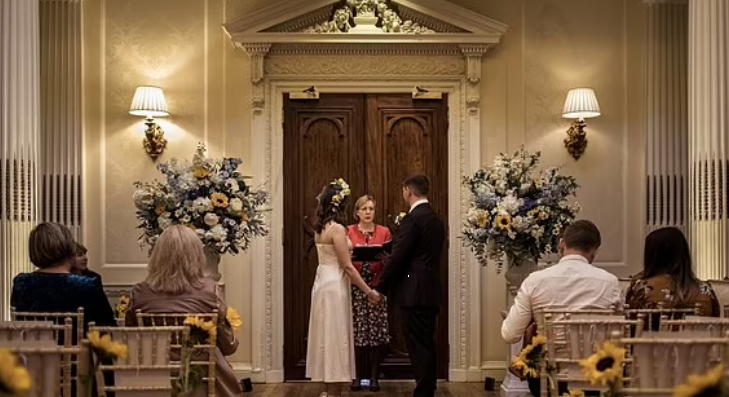 ‘Also, the war was still going on so every day we would wake up to some terrifying news,’ the newlywed added. ‘The place where I was staying small I had to share the lady’s bed – but I’m still really grateful to her.’

Maria was on a flight to the UK the day after her visa was issued in March, and Vitalij greeted his fiancée at Stansted Airport.

‘It was very difficult,’ he said. ‘I didn’t believe there would be a war, I was quite sceptical about that, but obviously it started.’

He praised the ‘huge help’ and charity offered from Polish people amid the conflict.

‘They were just you know, giving everything to the people,’ he said. ‘Driving them wherever they need to, they were taking babies and feeding them, everything you needed.’ 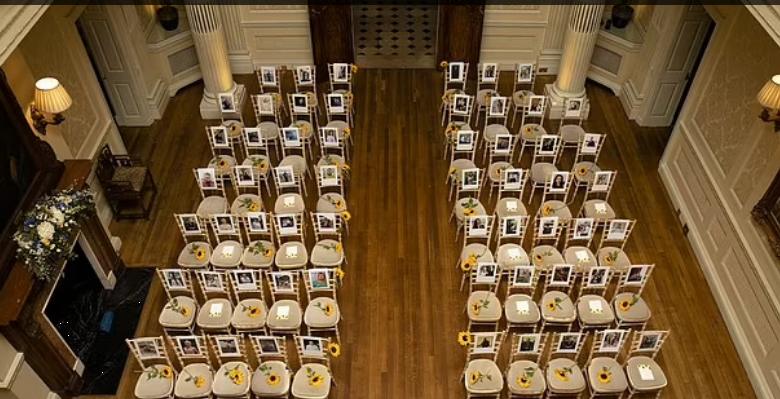 Once here, Maria lived with Vitalij in his mother’s house in London.

‘Obviously I was and I still am missing Ukraine,’ she admitted. ‘But it wasn’t that difficult for me to settle as we were planning my move to London after the wedding.’

Now settled, Maria said she and her husband plan to repeat their wedding when the war is over – so the pictures on chairs can be replaced with their loved ones in the flesh.

She added: ‘This year has just shown us that whatever we are planning could be changed in the blink of an eye.’

Meanwhile the war in Ukraine rages on, as one Vladimir Putin’s allies recently claimed that he will ‘send Ukraine back to the 18th century’ by pushing ahead with attacks on the country’s energy facilities.

The UN’s World Health Organisation has warned of ‘life-threatening’ consequences if the Russian attacks continue and estimate millions more could flee the country as a result.

In Kyiv this week, mayor Vitali Klitschko said more than two-thirds of the city remained cut off, although some water supplies had been restored overnight.

Meanwhile, Ukraine’s armed forces said that Russia had fired up to 70 cruise missiles at Ukrainian towns and cities on Wednesday.

Liz should take off her brа more often! She does look so much younger! go crаzy
Celebrities 0 118097