Alicia, in the name of a great cause, naked in front of the camera. It was worth it

Alicia Silverstone has never gone nude for a role, but she’s willing to bare it all for animals. PETA (People for the Ethical Treatment of Animals) is the sometimes controversial organisation behind the long-running

series of ads featuring various celebrities undressed for its “I’d rather go naked than wear fur” campaign. But amid declining fur sales, the organisation ended that campaign in 2020.

Now the organisation is turning its spotlight on leather, and Silverstone is lending her skin to the cause. “I never, ever, get naked in TV, in film, nothin’, never, nope—but I’ve done it for PETA because that’s how much it matters to me,” the Clueless star told People.

“The amount of resources, water, food, oil for transport, the amount of energy that goes into making leather is extraordinary. It’s just not sustainable. The earth can’t handle it.”

Silverstone doesn’t just talk to the talk: She’s been vegan since 1999 and has a recipe book and website all about animal alternatives.

In the ad, Silverstone poses amid cacti, covering her NSFW parts with her hands. “Don’t be a prick,” the ad says, imploring viewers to explore plant-based leather alternatives. (Worth noting that it’s not promoting plastic alternatives, which are also bad for the environment.) 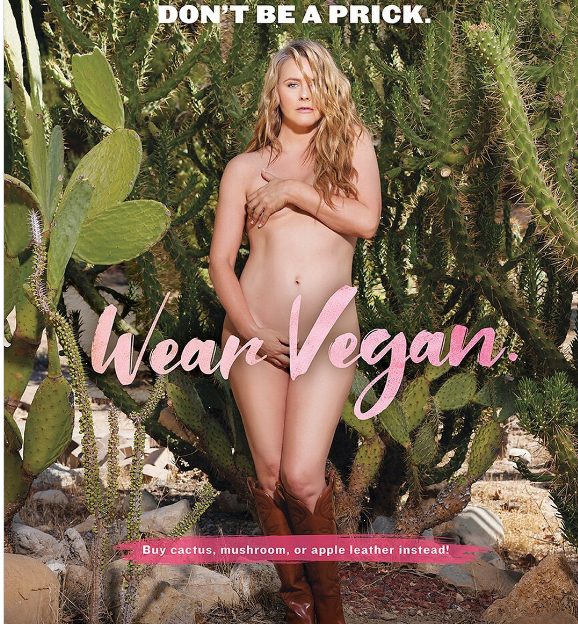 Silverstone isn’t technically completely naked. She’s got cowboy boots on, presumably made from vegan leather. Maybe she didn’t wanna show her feet for free? Also, LOL, PETA tagged her on the crotch. Subtlety has never been the point.

The OG Batgirl (who got body-shamed as a teen star, ugh) joked about the difficulty of her vegetable-based lifestyle in a recent Instagram post, saying that the only veggies she could find in Texas were in a 9 a.m. Bloody Mary.

Alicia Silverstone is close buds with designer Christian Siriano, who does make clothes in vegan leather. Can she feature in his next runway show? Love to see the gal naked, but if she’s trying to sell us clothes, we wanna see those too!