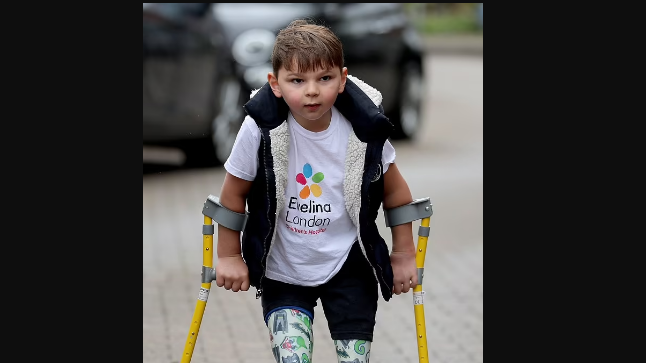 As a result of violence, this child lost his legs. However, he did not give up, raised a lot of money for charity and goes in search of Santa

A little boy who lost both legs through abuse before capturing the nation’s heart by raising £1.8million through fundraising walks is heading off on an adventure of a lifetime to find Father Christmas in Lapland.

Brave Tony Hudgell, eight, told of his excitement after he headed to Gatwick Airport this morning before jetting off on the four-day trip. 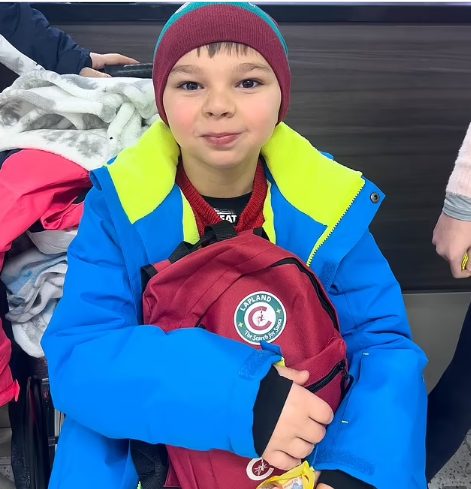 He said he couldn’t wait to join in the fun with reindeer and husky dogs, meeting elves and searching through snow covered forests to track down Santa’s hideaway as he prepares for Christmas.

As he headed off to Santa’s grotto, Tony told MailOnline: ‘I cannot wait to see the elves and Santa and it’s going to be the best time ever.

‘I’m looking forward to seeing the reindeer too.’

Tony is flying out with his adoptive parents Paula and Mark Hudgell along with three of their younger children for the adventure which will see them staying in a log cabin.

The youngster has been hailed a hero by Prince William and wife Kate over his extraordinary fundraising walks to help vulnerable children. He set out to raise £500 for the hospital that saved his life by walking 10km in 30 days in 2020 after being inspired by Sir Captain Tom Moore, who raised more than £33million walking in his backyard. 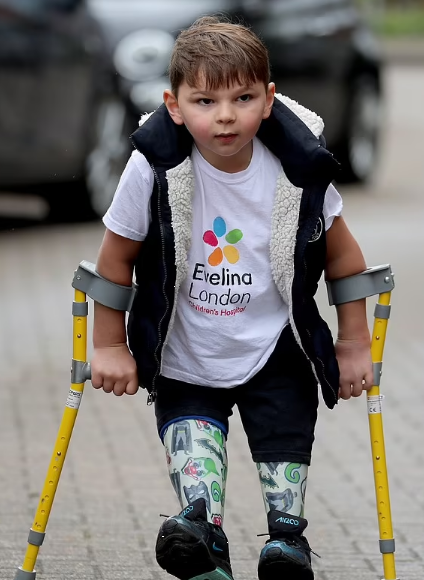 Last year a foundation set up in his name to enhance the lives of children who have been affected by physical, emotional, or psychological abuse provided more than 700 Christmas presents for youngsters in need and he is hopping to match that this year.

And his efforts are set to receive a huge boost from Father Christmas himself who is planning to surprise the youngster with a cheque for £5,000 for the Tony Hudgell Foundation.

Tony’s incredible efforts come despite an horrific start to life which led to him undergoing 23 operations and eight blood transfusions.

The inspirational youngster was rushed to hospital with life-changing injuries in 2014 when he was 41-days-old, following horrific abuse from his parents, Jody Simpson and Tony Smith.

The pair were found guilty of child cruelty in 2018 and are both currently serving a ten-year prison sentence.

In 2017, Tony had both legs amputated due to the injuries he sustained as an infant. He is still learning to walk on prosthetic legs without crutches. 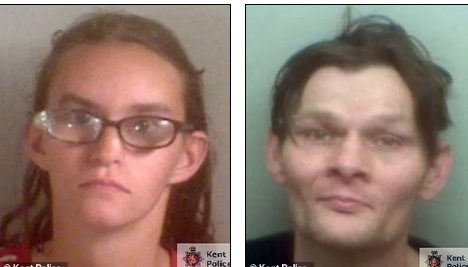 His fortunes turned around after his life was saved by specialists at the Evelina London Children’s Hospital, of which the Princess of Wales is an official patron.

He found a loving home after he was adopted by Paula and Mark of West Malling, Kent.

The family have successfully campaigned for longer sentences for anyone who seriously harms a child, and are now calling for a register of abusers.

Paula – who has been fighting her own battle with bowel cancer and underwent emergency surgery just six weeks ago – said: ‘When he found out about the trip Tony was just so excited. He always wanted to go and meet the real Santa – he’s just super excited.

‘There has been quite a countdown over the last few weeks.

‘He’s most looking forward to the snow and the huskies and hopefully we’re going to find Father Christmas.

‘It will be really really nice. They have a kick sledge for Tony so that it will be accessible for him. It’s like a seat on skis that someone can push him along on.

‘It really is going to be the trip-of-a-lifetime. It’s been on my bucket list forever. 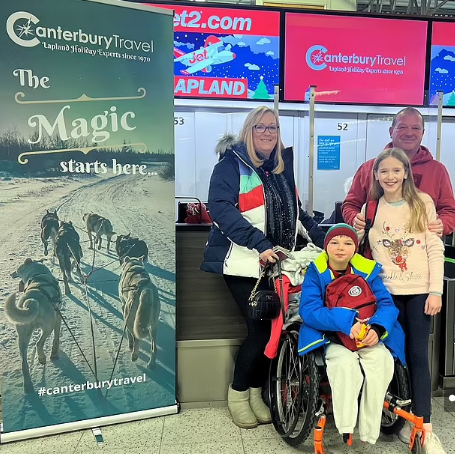 ‘All of us have always spoken about Lapland. It’s always something we wanted to do but we’re never able to do. We can now – and it’s absolutely incredible, just wonderful.’

Paula, 55, said of the past year and her own personal battle: ‘We’ve been looking forward to it for such a long time. I was diagnosed with bowel cancer. It’s been a really tough year and I ended up having emergency surgery six weeks ago.

‘Thankfully everything is going alright now and I just can’t wait for the family time and make some magical memories.

‘It’s been my goalpost throughout the whole of the year that I wanted to be well enough and be able to go and make those memories.

‘It has really come at the right time as well. Our family needed a break. We just cannot wait.’

The family’s relentless campaigning led to the establishment of Tony’s Law, named after the youngster, which has seen the maximum penalty for causing or allowing serious physical harm to a child to increase from ten to 14 years, while causing the death of a child has risen from 14 years to life.

They are still facing a personal battle as Tony’s parents, who were set to be freed from jail, have mounted a legal challenge after Justice Secretary Dominic Raab intervened in a bid to keep them behind bars. 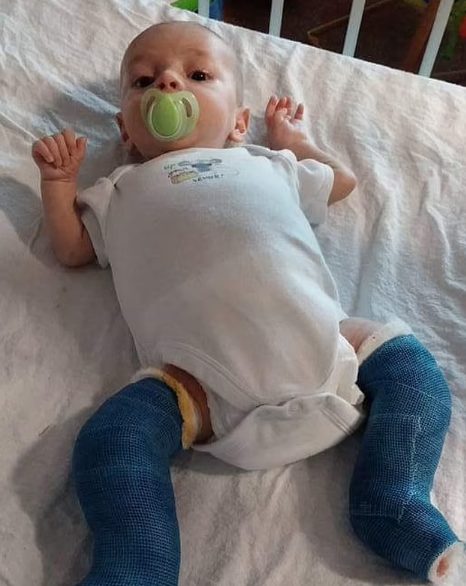 A hearing took place in the High Court last week and the family are awaiting a ruling which they hope will see Tony’s mother remain behind bars.

Paula said: ‘We are still waiting for the judgment. We still have not heard. I’m hoping there might be good news but we can only hope.

‘If the challenge is successful then she will be released but if it is not there will be a parole board hearing.

‘We have done everything we can to get the justice Tony rightly deserved. We can never say we never did enough.’

Tony, who was granted special permission from his school to make the trip, received a touching letter from the Princess of Wales after he completed his famous walk.

She congratulated him on his ‘amazing fundraising efforts’ which she said were ‘hugely appreciated’ and added: ‘We are all so proud of what you have achieved’. 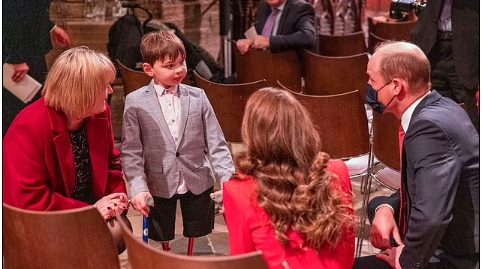 He went on to meet William and Kate who ‘spent ages’ chatting with the youngster when the couple attended Together At Christmas carol concert at Westminster Abbey last year.

He has also met Prince Harry along with a string of celebrities and earlier this year he was singled out for his inspiration by then Prime Minister Boris Johnson.

Despite the attention attention Paula said of Tony: ‘He takes all of it in his stride, so to speak. He is just amazing.

‘He’s very much a people person. He can encapture a room of people and will talk to them all.

‘He’s got such good social skills. He loves being around people. He loves seeing people happy and doesn’t like to see them sad.

‘He has continued his fundraising for the foundation. We have a Christmas present appeal going. Last year we managed to gift 700 presents to vulnerable children. We’re hoping to do that or more again this year.

‘Tony is lucky although it’s come at a huge cost. 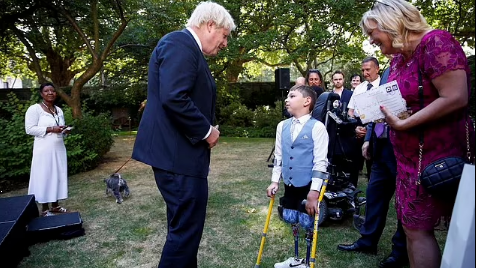 ‘There are so many children out there that sadly aren’t in his position and if he can spread a bit of magic for their Christmases as well – that’s what we hope to do.’

She added: ‘Hopefully one day Tony will realise there is a huge legacy there. Because of him everything has changed and child cruelty is taken more seriously.

‘We are still pushing for a child cruelty register. There’s still a lot more for us to do.’

Paula, who has eight children, told of her joy after Lapland holiday specialists Canterbury Travel funded the once-in-a-lifetime trip for the family.

And despite his busy schedule the firm managed to enlist Santa to break off from his Christmas preparations to present the cheque to Tony’s foundation on their behalf.

Paula said of the trip to remote Luosto which is inside the Arctic Circle: ‘It’s absolutely wonderful. They said they were going to gift it to us because of all Tony’s efforts with his fundraising and changing the law which was just absolutely incredible.

‘It was lovely they managed to include the three youngest children as well because times are hard for them too like many others.’

Jacqui Banham, Managing Director at Canterbury Travel, said: ‘We are delighted to have been able to take Tony and his family to create everlasting memories together in Lapland.

‘Children are at the heart of all we do at Canterbury Travel and we wholeheartedly support Tony’s foundation. He is an inspiration to us all.

‘We are overjoyed that he is experiencing the Christmas magic he deserves whilst here with us in Santa’s winter wonderland’ .