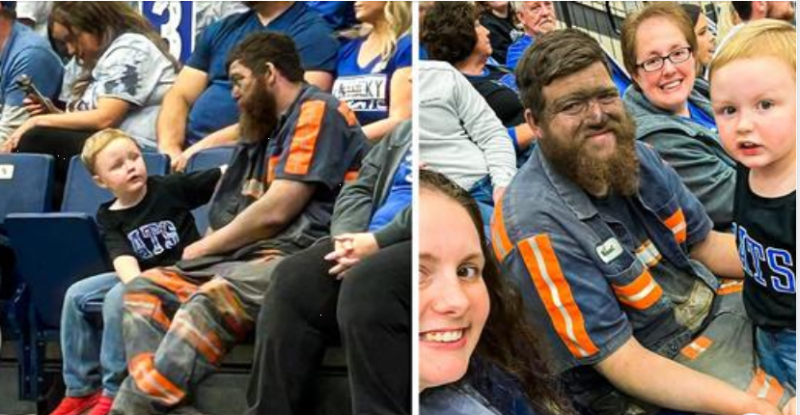 Dad came to the match in very dirty clothes, but left the arena, becoming famous all over the Internet

Recently, a photo taken during a basketball game went viral. In the photo, there is a man cheering for his team together with his son, but he’s dressed in dirty overalls and his face is covered with coal soot. We decided to find out who this man is and why this photo has gotten thousands of likes.

The photo was initially posted by a basketball fan, and it would have probably gone unnoticed if the Kentucky head men’s basketball coach, John Calipari, hadn’t reposted it. The coach explained what was happening in the photo. It turned out that the man, who is a coal miner, rushed to the game after his shift because he wanted to see the game together with his son. He simply didn’t have time to take a shower and change his clothes, so he showed up dirty.

The coach was impressed by the man’s actions and promised to give him VIP tickets for the next game. The photo became so popular online that the man’s wife became aware of it. She even created a new Twitter account because she lost access to her old one.

Molly (the woman’s name) said that this was her husband, Michael McGuire, with their 3-year-old son, Easton, in the photo. The fact is that Michael promised his son they’d watch his first-time-ever basketball game together. But his shift ended late, so Molly brought Easton to the arena to meet her husband there. “It was important to him to watch the game with Easton from the very beginning,” the woman explained.

The coal miner was noticed and photographed by Sue Kinneer, a Kentucky basketball fan. “The man was dirty, with soot on his face. He looked very tired, but he was smiling at his son, and his son was hugging him and climbing on him. They looked so happy,” Sue told journalists.

Internet users admired this touching story about a man who found time and energy to join his son at a basketball game despite his tiredness from a day of hard work. “He’s the best dad in the world,” Molly said.

What do you think about this story? Would you dare to come to a game all dirty to make your child happy?

Celebrities 0 26
It turns out that Twilight could have been left without Edward. Robert told what

Celebrities 0 18
This is why Jason David Frank passed away: “You will always be your favorite

Interesting 0 27
The child, whose photo everyone knows, is completely healthy and returned to normal life,
Last news

It turns out that Twilight could have been left without Edward. Robert told what happened between him and the director
Celebrities 0 26

This is why Jason David Frank passed away: “You will always be your favorite ranger”
Celebrities 0 18

This woman can’t buy her kids Christmas presents from Santa: “We’ll have to tell them the truth that there’s no Santa”
Interesting 0 85