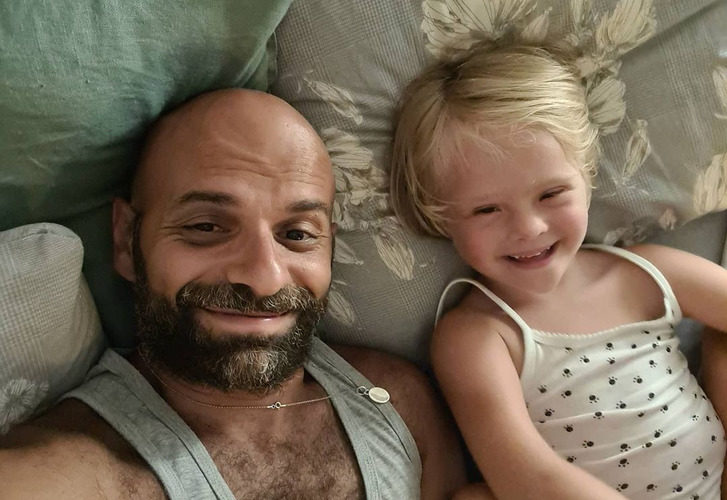 The world is full of people who need help, and, fortunately, of those who seek to help others. Call it luck or fate, sometimes these 2 types of people meet. As if that weren’t enough, such encounters can form the strongest bonds, as in the case of Luca Trapanese, who adopted Alba and managed to change their life completely.

The future father had to overcome many hurdles at the beginning.It seems as if Luca and Alba’s first meeting was a matter of fate. Luca had just gotten out of a serious relationship with his boyfriend and Alba was given up for adoption by her biological mother. By the time of their meeting, the little girl had already been rejected by 20 adoptive families. In July 2017, Luca came to her rescue.

The two of them are truly inseparable. Luca had been dreaming of becoming a father for a long time, but being gay and single seemed to be quite a challenge when it came to adoption. Surrogacy is not an option in Italy and gay fathers are not registered as co-parents on birth certificates.

Luca was informed that he could only adopt a child with a disability or serious illness. He didn’t care about that at all.

Luca was meant to be Alba’s dad.There are so many touching posts on Luca’s Instagram that show that the 45-year-old’s life revolves around his beloved princess. “I’m a single dad in love with his daughter,” he wrote on his profile.

Alba is now 4 years old and her life with her dad has been filled with incredible moments. Luca accepts fatherhood as his role in life. “I’m meant to be a father!” he says when interviewed. He loves devoting himself to his daughter and her development. Alba is now his main priority.

Their life is anything but boring.Father and daughter love spending time together. They both really enjoy dancing and singing, and Luca believes Alba to be a real star in these two hobbies.

They have had many successes and reached many milestones together. Luca recalls that the most exciting moments for him have been when Alba called him “daddy” and when she walked for the first time.For every child, learning to walk is a huge milestone. But for one with Down syndrome, their first steps and words are even more special.

Luca is willing to defend his daughter for the rest of their lives.Alba is not like other children, and her father has made it his life’s goal to give her a voice. His biggest struggle is to make others understand that Alba is, above all, a person who needs to be taken into account so she can get everything she needs in life. Luca is convinced that people have to fight against mental barriers and any kind of exclusion.

He believes that Alba will meet people who value her talents and don’t just consider her a person with a disability. He considers every kid to be amazing, and children with a disability are capable, strong, and have to face much more adversity than their peers who are not disabled.

Luca wants to help other families to better understand their children.He even wrote a book titled Vi stupiremo con difetti speciali or We Will Amaze You With Special Flaws (in English). It speaks about disability and diversity and describes 3 children who turn their disabilities into special gifts. And this is the way of thinking that Luca tries to cultivate in Alba every day.

Luca has a message for those parents who want to welcome a child into their home, he says, “Adopting a child is the most rewarding thing you can do. You have to make this decision consciously, without looking back. Being a parent is a calling.”

What’s the most special thing about Alba and Luca’s story?

News 0 39
Christina shared with fans that she can hardly move without a cane. It’s all

Interesting 0 90
Kaya showed off her toned figure in shorts. The girl went for a walk

Christina shared with fans that she can hardly move without a cane. It’s all about multiple sclerosis and being overweight
News 0 39

Kaya showed off her toned figure in shorts. The girl went for a walk with a friend and a dog
Interesting 0 90