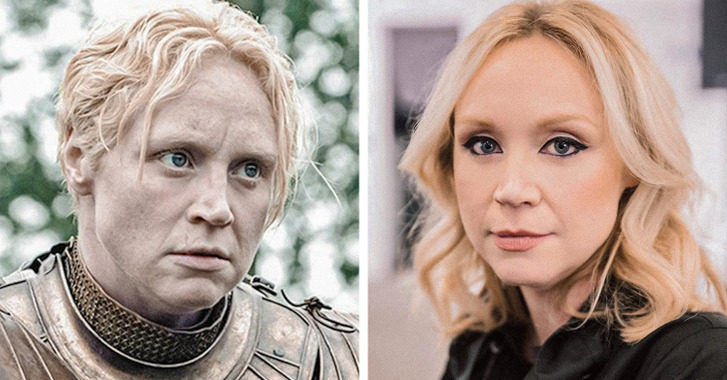 Gwendoline Christie’s international fame came after the release of Game of Thrones. At the time, the 33-year-old actress had only a handful of film roles under her belt, and they couldn’t fully showcase her talent. By playing the warlike Brienne of Tarth, she opened the door to the world of the cinema. However, as is often the case with performers of memorable characters, Christie became a hostage to only one role. And only a decade later, a director came along who was able to show the world, and most importantly the actress herself, a different Gwendoline.

Gwendoline Christie before Game of Thrones

Most of us know Gwendoline Christie as a knight from Westeros who can easily take on any man in battle. She’s edgy, rugged, has no fashion sense, and has no desire to please anyone. However, once you get to know her better, you realize that this character is nothing like the actress herself. Her first role was much more suited to her personality.

She was lucky enough to make her film debut with a big-name director. Christie played an imposing shopgirl in Terry Gilliam’s fantasy adventure film The Imaginarium of Doctor Parnassus. The role was small but vivid and memorable. A striking blonde dressed to perfection — this image was much closer to someone who, from childhood, saw much more in outfits than just clothes: “My mother used to make my clothes, and it was an escape. It felt like an immediate means of transformation of oneself.”

Her passion for fashion and beauty continued into her older years. While attending drama school, Christine once helped a master’s student at Saint Martin’s. From her, she learned about having a sense of style. The actress recalls that the first time she encountered the brand Comme des Garçons, she was shocked. This moment changed her worldview. However, fate sometimes plays cruel jokes on us. So, the first high-profile role to bring Gwendoline international fame, would, for many years to come, take away her ability to play characters with a sense of beauty and style.

The clinging role of a militant woman

Playing Brienne of Tarth on the cult series Game of Thrones required a great deal of effort from the actress. Aside from the physical challenges like fencing and horseback riding, Christie was painstakingly delving into the very core of her character for long periods of time, trying to show her true femininity despite her outward unattractiveness. “It can be very difficult to play a character that society says is physically ugly because it feels like a rejection, like all of the things you feel insecure about are enhanced, telling you that you are no good.”

But it worked. Brienne, played by Christie, went from a minor character to becoming one of the main and most beloved violins of the orchestra called Game of Thrones. Critics also praised the actress’s work. And for millions of insecure viewers, the edgy Tarth became a source of inspiration.

However, there are two sides to this coin. The image of a warlike woman became so strongly associated with Gwendoline that offers of similar roles started pouring in. Whether it was the villainous Jane Murdstone in The Personal History of David Copperfield, the brave Commander Lyme in The Hunger Games trilogy, or Captain Phasma in Star Wars: Episode VII — The Force Awakens, each time Christie played the same character inspired by Brienne Tarth, a strong warrior woman without a trace of coquetry or weakness.

The actress said that she developed a certain connection with these characters. They’re special because everyone builds relationships with them not for their appearance but because of their very essence, the character that lies within. And that’s so valuable in today’s world.

It’s fair to say that sometimes the actress had a chance to play roles of a different nature, but there were considerably fewer of them. In the 2018 horror film In Fabric, for example, she was entrusted with the role of an extremely glamorous model. And in the experimental Shakespearean production of A Midsummer Night’s Dream, Gwendoline played Hippolyta and Titania. But none of these could erase the role that stuck to the actress until she met Tim Burton.

One day Gwendoline received a message that Tim Burton himself, the great master of gothic adaptations, wants to work with her. Moreover, he’s offering her the role of Larissa Weems and is willing to give the actress complete freedom to embody this image. Christie was beside herself with joy. Firstly, she had grown up watching movies about the Addams family. Secondly, it’s finally in her hands to show herself to the world as she wants to be seen. So the star said “yes” without a second thought.

Traditionally, the actress put the character’s inner world to the forefront. She started to imagine what this woman’s past was like, and how she should behave. The inspiration came from old Hollywood divas Tippi Hedren and Kim Novak. She imagined for herself a character with heart wounds and a troubled past.

“I like to transform into characters and people that are very far away from myself and I would never be cast in this part. It was an opportunity to create that and to inhabit that sort of impenetrable, imperious character with that classic idea of femininity,” Christie shared as she worked her way through her character.

“It is the first time I’ve ever felt beautiful on screen,” the star finally said when she saw herself in the mirror. The painstaking collaboration with a team of make-up artists, hair stylists, and costume designers exceeded all expectations. Here she is, the character Christie created herself, who, like her, has a sense of style and femininity. This was a fateful moment for Gwendoline not only as an actress but also as a woman. In an interview, she shared that she suddenly let go of her shame and felt truly beautiful and attractive.

The Netflix series Wednesday has just been released, but it has already received high praise from viewers. And undoubtedly, Christie’s character has played her role in achieving this success. We believe the role will open up new opportunities for the actress to play different characters. And perhaps they too, like Brienne of Tarth once did, can bring hope to millions of insecure people. You just have to meet your “Tim Burton,” who will help reveal your beauty. Or find that director in yourself.

What do you think of Gwendoline Christie’s new look?

Daniela has endless legs. You look at her in a bikini
Celebrities 0 115946