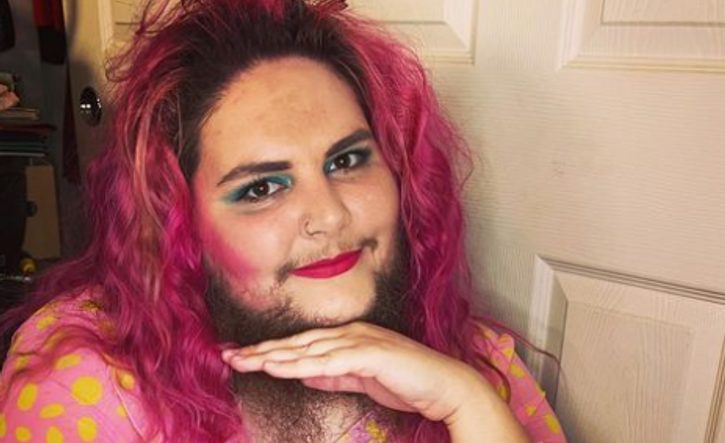 The obsession with always presenting ourselves as perfect has now become predominant in contemporary society. Each of us tries to fight against our own physical insecurities, either by hiding them or trying to modify them. Dakota Cooke, a 30-year-old woman, instead, decided to embrace her imperfection and show it without fear, as it’s not what emerges at first glance that defines who we are.

The first time she noticed abnormal hair growth was when she was 13 years old. It started with peach fuzz, then evolved into a longer, darker peach fuzz, until it became the glorious beard we see today.

Despite numerous medical tests, Cooke doesn’t have an official diagnosis yet. In fact, one of her doctors used to call her “Mystery Lady” because he couldn’t figure out her condition. She has actually been tested countless times for PCOS, but as of her latest test results, the medical professionals confirmed that she does not suffer from that condition.

Therefore, the closest they’ve come to figuring out what was going on with her body is an adrenal gland disorder, which leads to the production of high levels of adrenaline, causing Cooke’s brain to produce way more testosterone, thus, resulting in excessive hair growth.

2. It was all difficult for her in the beginning.

In spite of her mystery condition, Cooke wasn’t particularly upset about it at first. However, the situation was uncomfortable for her family, and that was very painful for her to deal with.

She recalls once accidentally hearing her stepfather’s friend say, “What’s going on with Dakota, she’s got about as much facial hair as I did in high school,” which lead her stepfather to take her to a hair removal session. There, the specialist spent the entire time telling her how girls don’t grow facial hair.

Cooke recalls that as a very damaging time for her, not because of her facial hair, but because of the reactions of people around her.

When she was in her early twenties, in order to overcome her insecurity, she started working on her mental health. She went through a period of self-acceptance, not just related to her beard, but about herself in general, as it wasn’t easy being a plus-sized girl in the small town where she lived, so there was a lot of trauma and societal expectations for her to unlearn. After this period of self-reflection, she was eventually able to learn to love and fully accept herself.

4. The turning point that put her on the right track

While on her journey of self-love, she ran into an old friend who had joined the sideshow. When she saw her glorious beard, she was so excited and so understanding and encouraged Cooke to also join the circus community. It was at that moment, the Bearded Lady realized that she too could be excited about herself and the amazing things she could potentially do. This is what helped her to completely get past her fear of what other people thought about her.

Today, Cooke is a circus performer. In the sideshow, there’s a group of people they call “Natural Born Freaks,” and she falls under that category. She is the only bearded lady in the world who performs sideshow stunts, which made her well-known in her community. She also absolutely loves to do advertisement campaigns.

Fortunately, her family and friends support her decisions now. It actually took a little time for some people to understand, but nearly 8 years later, she has nothing but supportive people in her life who know that she is still the same Dakota Cooke and that she just lives her life much more authentically now.

6. Her message for us to overcome insecurities

What do you think about this inspiring story? What do you personally do to fight your own insecurities? We’d love for you to share your opinion with the rest of us in the comment section.

Celebrities 0 26
It turns out that Twilight could have been left without Edward. Robert told what

Celebrities 0 18
This is why Jason David Frank passed away: “You will always be your favorite

Interesting 0 27
The child, whose photo everyone knows, is completely healthy and returned to normal life,
Last news

It turns out that Twilight could have been left without Edward. Robert told what happened between him and the director
Celebrities 0 26

This is why Jason David Frank passed away: “You will always be your favorite ranger”
Celebrities 0 18

This woman can’t buy her kids Christmas presents from Santa: “We’ll have to tell them the truth that there’s no Santa”
Interesting 0 82