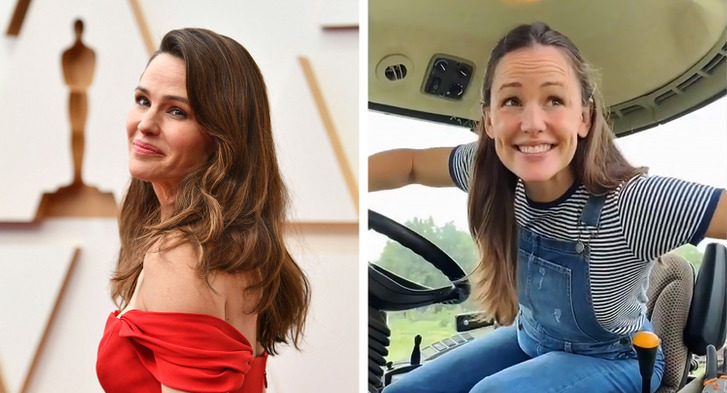 Jenn decided to buy the farm where her mother spent her childhood. The actress intends to use it for charitable purposes

Many famous Hollywood actors use their talents not only in movies but also in business. For example, they can launch their own cosmetic or lingerie lines. Jennifer Garner is no exception here. But she chose a different path and bought the farm where her mother grew up.

At CHEERY, we got a bit carried away while looking through Jennifer’s Instagram and admiring her adventures. It turned out that the Hollywood actress knows a lot about gardening and even knows how to drive a tractor. We also found the family recipe of a dessert that Jennifer likes to make together with her mother, and you can find it at the end of the article.

The future actress was born in a conservative family. Her father was a chemical engineer and her mother was a homemaker. They raised their 3 daughters in strictness — as teenagers, the girls were not allowed to wear makeup, paint their nails or pierce their ears.

However, Jennifer speaks warmly of her childhood. She laughs about what she and her sisters looked like at that time — all having similar bangs and protruding ears.

In 1990, Jennifer Garner entered the university with chemistry as her major, but soon she changed from it to theater. After graduation, she began to act in movies. The role that made her famous was Sydney Bristow in the series Alias. For her performance, the actress won the Golden Globe for Best Actress — Television Series Drama and was nominated for the Primetime Emmy Award 4 times.

Also many of us remember her role of Dr. Eve Saks in the drama Dallas Buyers Club where the actress starred alongside Matthew McConaughey. This role earned Jennifer a Screen Actors Guild Award nomination.

Jennifer’s first husband was actor Scott Foley whom she met on the set of Felicity in 1998. However, the couple separated 5 years later. And from 2005 to 2018, the actress was married to actor Ben Affleck. They have 2 daughters and a son together.

Motherhood made Jennifer Garner realize how important it is to take care of the timely development of children. And she had enough energy for her own family and other kids. The actress became an ambassador for the non-profit organization Save the Children USA working to improve the lives of children around the world.

Since 2014, Jennifer has served on the board of trustees for the organization and promoted national literacy and early education efforts. She often visits families involved in the Early Steps to School Success program.

Another thing that the actress promotes is the proper nutrition of children. She approached this with all the vigor and decided to produce healthy food on her own. Jennifer Garner is currently co-founder and chief brand manager of the organic, fresh baby food company Once Upon a Farm.

These foods are produced at the farm Jennifer bought. But this is not just an ordinary farm, it’s a place with a history. This is the farm where her mother grew up, and Jennifer used to visit it as a child and even fish in the local pond with her uncle.

Jennifer’s grandparents bought this piece of land in Oklahoma, in 1936. At the time, they were on a tight budget, so they spent the whole day negotiating over $20 off the advertised price. Soon the husband and wife became the owners of 20 acres of land and a small house with 2 rooms.

In those years, they grew pecans, lettuce, radishes, and potatoes at the farm. But over the years, the land fell into disuse: it kept switching ownership from one family member to another. This continued until 2017 when it was purchased by Jennifer Garner.

Jennifer decided that she would bring the farm back to life. In 2018, she co-founded the company Once Upon a Farm and began to grow healthy organic fruits and vegetables for baby food.

The actress hired her uncle Robert and aunt Janet to help her with the farm. They used to own it, but now they decided to support their niece in her endeavors.

Soon the farm became a successful enterprise. In one of her Instagram posts, the actress wrote, “Look, Mom, your farm has come to life! 700 blueberry bushes, 50 fuyu persimmon trees, 3 cows (as grass management and pets), 2 farmers (uncle Robert and aunt Janet) and 1 farmer wannabe — yours truly.”

The farm soon got a bunch of new inhabitants — chickens, that the actress and her helpers grew together.

The actress describes all her rural adventures on her Instagram page where she jokingly calls herself “farmer Jen.” Fans of Jennifer Garner can see her driving a tractor or singing songs to carrots.

Farmer Jen is sure that all plants need love and care. Once she recorded a video, in which she even kissed plants, and wrote, “Our blends are filled with the freshest fruits, yummiest vegetables, and…love.”

The actress tirelessly advertises her fruit and vegetable business and regularly posts recipes for healthy dishes made from natural foods on her social media pages. For example, instead of the usual chips, she offers to treat family members with kale chips.

These healthy chips take 15 to 25 minutes to make. Coat kale leaves in olive oil, add salt, optionally sprinkle with grated parmesan and place in the oven at 200°F.

The founders of the company are involved in charity. For example, a part of the proceeds from Farmer Jen’s Pumpkin Oatmeal Cookie blend was donated to Save the Children USA mentioned above.

On her blog, the actress wrote that Once Upon a Farm is helping to raise funds for those in need and is committed to serving one million meals to kids from poor families.

Jennifer Garner believes that children can be taught to eat healthy from an early age and says, “If you want your kids to grow up loving healthy food, give them healthy food they love.” To make sure children don’t refuse to eat fruit and vegetables, the actress shares life hacks on preparing healthy children’s snacks.

Judging by the many photos and videos on Jennifer Garner’s blog, the farm she brought back to life is now thriving. And the celebrity, who works there tirelessly, repeats, “Thank you, Earth. Thank you to my grandparents, Harvey and Violet English for this land.”