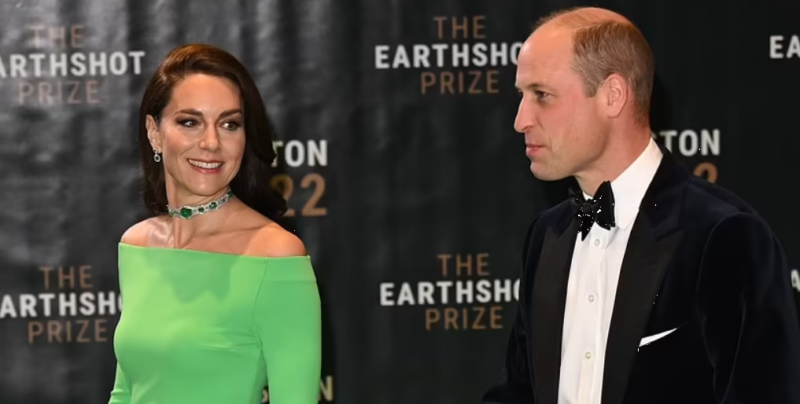 The Princess of Wales puckered up for a kiss with her old friend David Beckham at husband Prince William’s glitzy Earthshot Award in Boston Friday night.

Kate, 40, looked thrilled to see the English football star, who made a surprise appearance at the environmental awareness event.

William – who is a longstanding acquaintance of Beckham thanks to his role as president of England’s Football Association – also looked happy to see the sportsman. Beckham was given a police escort to the venue, to which he traveled in a hybrid vehicle, as did the other talent invited to attend the evening.

He met up with the couple as the Princess of Wales brought the theme of her husband’s eco-friendly Earthshot Prize to life in spectacularly stylish fashion this evening, when she arrived on the ‘green carpet’ wearing a rented neon green off-the-shoulder gown. 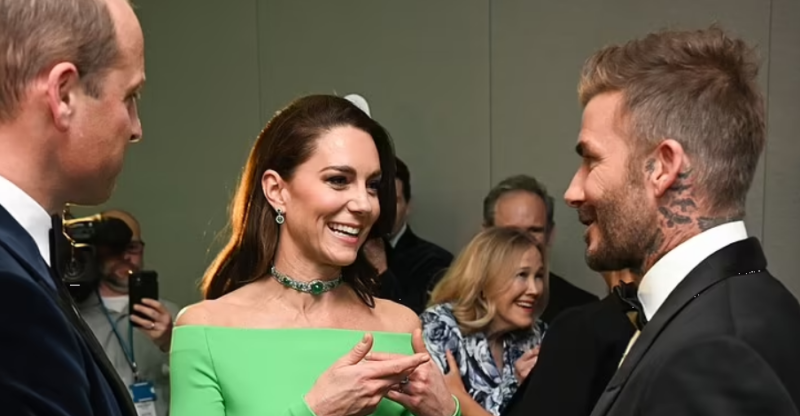 Kate, 40, certainly pulled out all the stops for the evening – which has been described as William’s ‘Super Bowl moment’ – taking a break from her normally-reserved sense of style in order to steal the spotlight in the eye-popping number.

In keeping with the theme of the evening, the Princess chose to don a rented design from a brand called Solace London, which the royal got from online designer rental platform HURR – which charges between $91 (£74) and $238 (£194) to loan the gown. 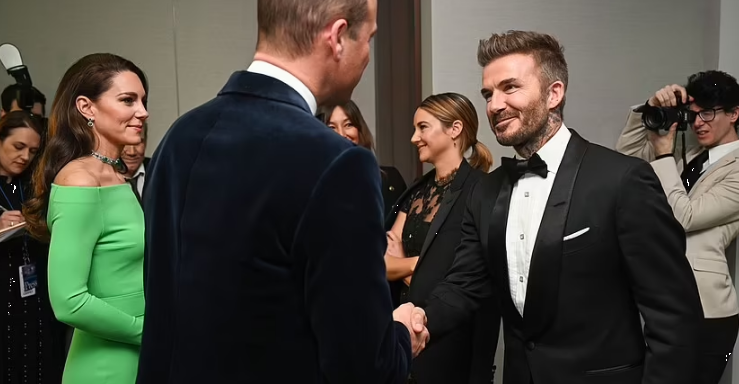 However, while Kate’s borrowed garment was a far cry cheaper than the high-fashion pieces she normally sports, she added plenty of bling to her look in the form of a stunning diamond-and-emerald choker that once belonged to her late mother-in-law Princess Diana.

The dazzling art deco choker – which is believed to be worth more than $15 million – was gifted to Diana by the Queen, who herself inherited it from her grandmother Queen Mary.

Diana wore the choker on a number of occasions, even pairing it with a green off-the-shoulder gown, just like Kate, when she attended a glittering event in London back in 1993.

However, the choker necklace is perhaps most famous for being worn by Diana on her head during her and then-Prince Charles’ tour of Australia in 1985.

At the time, images emerged of the then-Prince and Princess of Wales dancing at a gala in Melbourne – in which Diana could be seen wearing the pricey piece of jewelry around her forehead like a headband.

It was later revealed that the fashion-forward moment happened purely by chance, after the Princess got the necklace stuck on her head while putting it on – only to like the style so much, she chose to keep it that way for the rest of the evening.

Kate added some more sparkle to the look with a pair of matching $11,375 Asprey diamond-emerald earrings, which she is understood to have recycled from her own collection, in keeping with the theme of the sustainable event.

Similarly, the Princess turned to her own closet when it came to her shoes – a pair of dazzling Gianvito Rossi heels.

Having encouraged guests at the Earthshot gala to wear vintage, re-used, or second-hand clothing in order to fit the event’s sustainable theme, Kate set a shining example by sporting the designer shoes, which she has worn on a few occasions in the past – including at a reception in the Bahamas during the Waleses’ Caribbean tour in March of this year.

The ceremony kicked off with a reference to the ‘colonists’ who came to Boston 400 years ago and settled on indigenous lands – a similar theme that was raised at the Earthshot launch on Wednesday, when Reverend Mariama White-Hammond urged attendees to ‘consider the legacy of colonialism and racism’.

At the Earthshot Prize gala tonight, it was Elizabeth Solomon, a member of the Massachusetts tribe at Ponkapoag who brought to light indigenous interests during her opening speech. 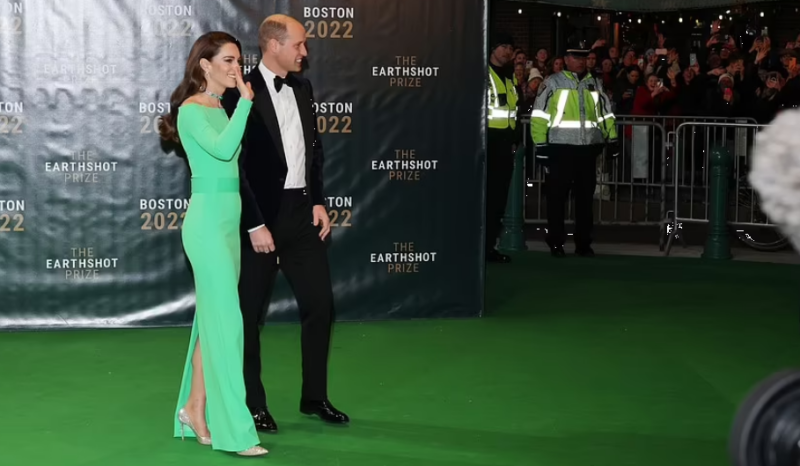 ‘We are gathered today in Native space and on the traditional lands of the Massachusetts Tribe,’ she began. ‘Please treat our lands and waters as precious because they are.

The show continued with a performance by singing sister duo Chloe x Halle – the latter of whom is set to star in the upcoming live-action Disney remake of The Little Mermaid. 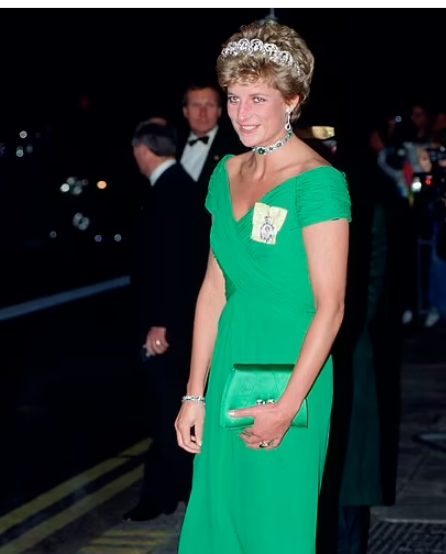 William then took to the stage to make his own speech, in which he thanked the people of Boston for giving the Earthshot Prize such a warm welcome, before going on to pay tribute to John F. Kennedy – whose daughter Caroline and grandson Jack Schlossberg were in attendance.

‘We at the Earthshot Prize are all so grateful for the welcome we have received this evening here in Boston over the last few days,’ the Prince began.

‘When I founded this prize in 2020, it was with the ambition to harness the same spirit of ingenuity, that inspired President John F. Kennedy to challenge the American people to put a person on the moon within a decade.

‘So, it has been an honor to share the stories of our Earthshot winners and finalists from the heart of his hometown.’

The royal went on to urge the attendees to take inspiration from the winners and finalists profiled during the event in order to find their own ways to address climate change. 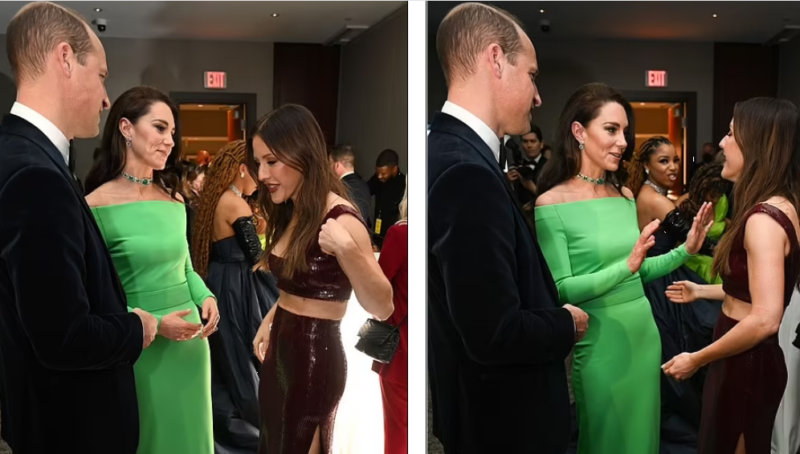 ‘I believe that the Earthshot solutions you have seen this evening prove we can overcome our planet’s greatest challenges,’ he said. ‘And by supporting and scaling them we can change our future.

‘Alongside tonight’s winners and finalists, and those to be discovered over the years to come, it’s my hope the Earthshot legacy will continue to grow, helping our communities and our planet to thrive.’

Ending the evening with a note of optimism, the Prince concluded: ‘In the same way the space effort six decades ago created jobs, boosted economies, and provided hope, so too can the solutions borne of tonight’s Earthshot Prize winners.

‘The decisions we make now will affect generations to come, which is why we must choose the path of hope, optimism, and urgency to repair our planet.’

Five winners were announced at the evening’s ceremony – one for each of the categories on offer at the event: Clean our Air, Protect and Restore Nature, Revive our Oceans, Build a Waste-free World, and Fix our Climate. Each of the five winners was given a $1.2 million (£1 million).

In the waste-free category, a finalist from the UK was chosen as the winner: Notpla Hard Material – a start-up run by Pierre Paslier and Rodrigo Garcia Gonzalez in London.

The makes packaging from seaweed and plants as an alternative to single-use plastic, and has already produced more than one million biodegradable takeaway food boxes for the firm Just Eat. 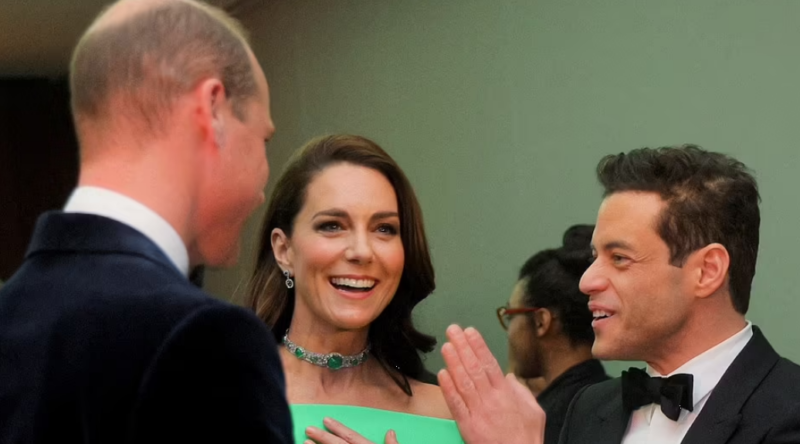 The Air winner was Kenya-based start-up Mukuru Clean Stoves, which provides cleaner-burning stoves to women in the country to reduce unhealthy indoor pollution, while the Ocean winner was an Australian initiative called Indigenous Women of the Great Barrier Reef.

India’s Khetyi – which works with local smallholder farmers to reduce costs, increase yields and protect livelihoods – was selected as the winner for Nature, while 44.01, from Oman, topped the Climate category with its unique technology that turns CO2 into rock.

Several of the event’s A-list guests were seen arriving at the venue ahead of the Prince and Princess, including Shailene, Ellie Goulding, Halle and Chloe Bailey, Rami, and Schitt’s Creek star Catherine O’Hara. 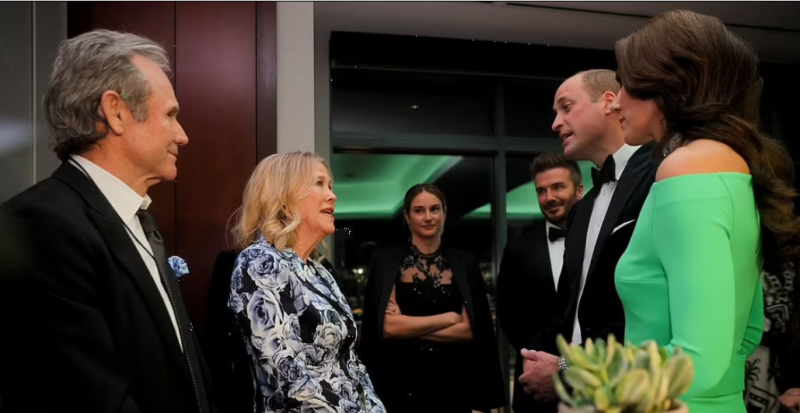 The evening was also given some political cache in the form of former Presidential candidate and Utah Senator Mitt Romney, who arrived at the gala event with his wife – whose arrival at the MGM Music Hall came just an hour after Prince William met with President Joe Biden.

Malek,41, who presented one of the awards, said he had been inspired to support Earthshot after meeting William at the premiere of Bond movie No Time to Die in September last year.

‘I applaud him, Prince William, and everyone who can come together to find innovative solutions to help resolve this global crisis because it can be resolved when we all put our minds together,’ he said.

Malek also revealed how he first got involved in the Earthshot initiative, after William asked him to support the program at the Bond premiere at the Royal Albert Hall – and adding that he was particularly motivated to get on board after hearing that the Prize was inspired by late President John F. Kennedy’s Moonshot challenge.

‘We first broached the subject at the Bond premiere,’ the actor continued.

‘I was just so impressed with the spirit he put forward. And speaking with Sir David Attenborough and [William’s] affinity to the Moonshot and what President Kennedy did.

‘I grew up being very inspired by President Kennedy so we had a discussion about that. There were, of course, some great quotes that came from that man — the one that stuck with me was, ‘Ask not what your country can do for you but what you can do for your country.”

The actor said he and William chatted again a ‘few weeks ago’ when they ‘had a long discussion’ about climate change. 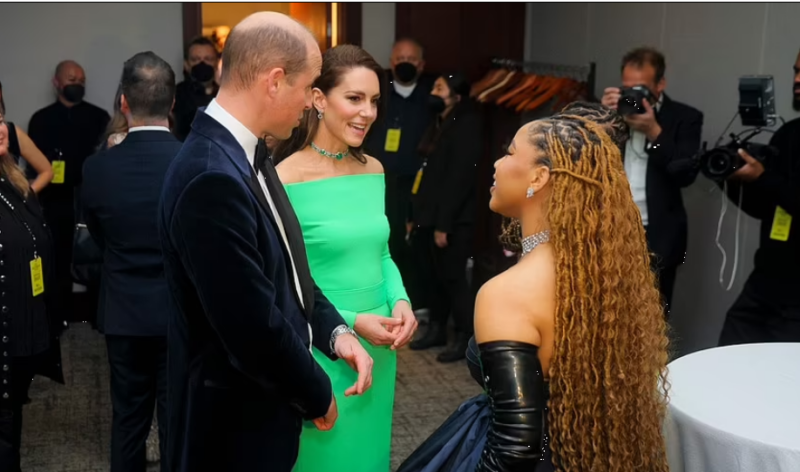 ‘I appreciate what Prince William’s doing. In the next 10 years I think the impact will be staggering. We can really affect change in the greatest way with these innovators who are being awarded this evening.

‘It could easily be thought of as something that’s pessimistic, gloom and doom, and Earthshot’s taken a way to flip it on its head and say, ‘Let’s inspire people to come up with the greatest solutions we can to save this planet.’

‘This is the greatest crisis we will ever love with and hopefully we can find a way to beat it.’

Malek also expressed admiration for the way in which William and Kate encouraged all attendees at the event to wear re-used outfits, noting that he felt it was just one of many indications that the Earthshot Prize gala had been ‘well considered’. 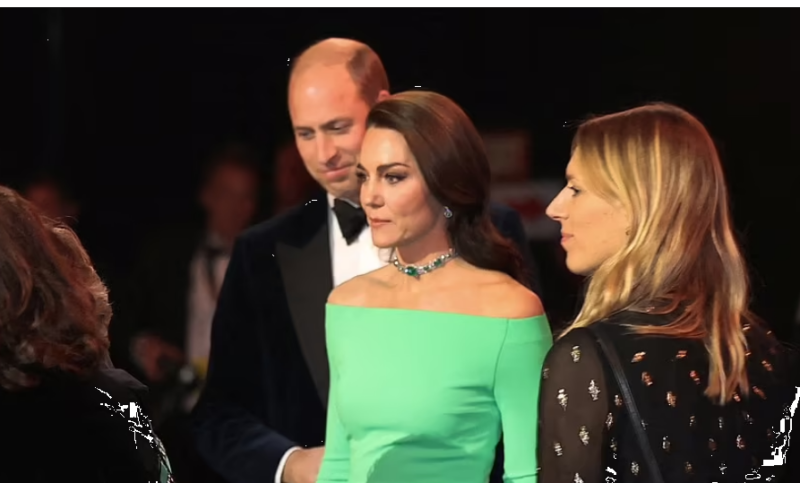 ‘[The sustainability theme] makes you think about every thing we’re doing,’ she said.

‘We’re all re-using our outfits in our line of work. I appreciate that. It’s been extremely well considered and well thought of and hopefully influences the way we continue through our day to day.’

He added: ‘It sounds like a cliche but it is the only time we’re going to have to make this possible.’

Guests were all asked to wear environmentally-conscious clothing as well as limiting their travel and offsetting their carbon emissions.

Radio 1 presenter Clara Amfo wore a long black dress by environmental campaigner and designer Vivienne Westwood, whom she praised on the green carpet, saying: ‘She has been very, very vocal about protecting the planet over the years.’