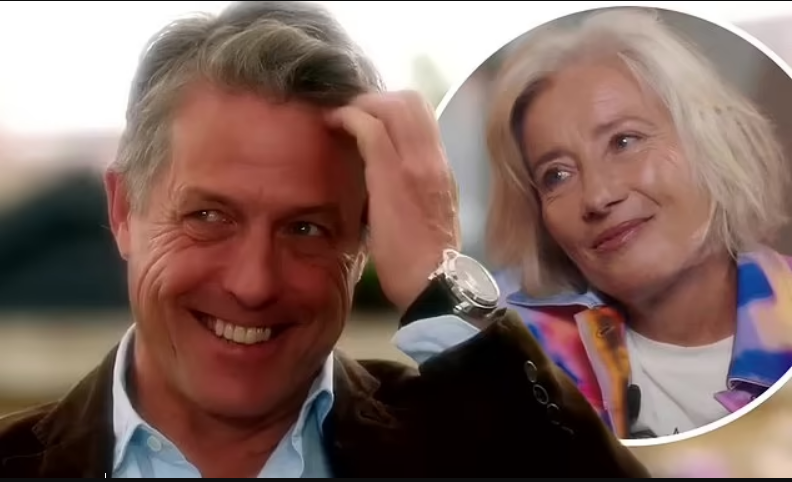 Love actually became classic, although only 20 years have passed since its release. Hugh and Emma are now discussing why the film was such a success.

Emma Thompson and Hugh Grant have shared their first impressions of Love Actually in a 20th anniversary special on Tuesday, claiming they initially thought it was ‘psychotic’. 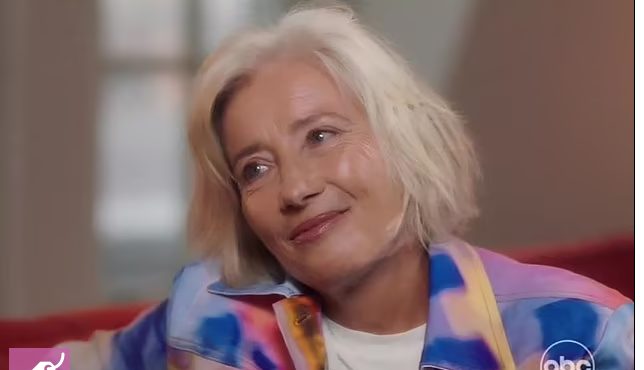 The actress, 63, was asked if she remembered what she thought when she saw the 2003 Richard Curtis romantic comedy screened for the first time.

During an ABC special The Laughter and Secrets of Love Actually: 20 Years Later, hosted by broadcaster Diane Sawyer, Miss Thompson said: ‘I do. I just sat there watching, thinking, “God, this is, uh, it’s quite kind of out there, isn’t it?”

‘And then Hugh came up behind me as we were walking out of the theater and says, “Correct me if I’m wrong, but is that the most psychotic thing we’ve ever been in?”

‘I just thought… what’s he talking about?’ the actress added.

‘But the thing is with him, what you have to remember is, when he writes about love, he means it. And that is quite rare.’

Love Actually was written and directed by Curtis and premiered in November 2003 to mixed reviews from critics.

But it was well received by audiences and has since become a modern-day Christmas classic.

At the start of the one-hour special Miss Sawyer notes that Love Actually has been viewed for more than 4.6 billion minutes by audiences all over the world.
The special also included interviews with Bill Nighy, Laura Linney, Thomas Brodie-Sangster, Olivia Olson and Martine McCutcheon.

Love Actually also featured English actress Keira Knightley, 37, who was shown participating in a table read of the movie before filming. 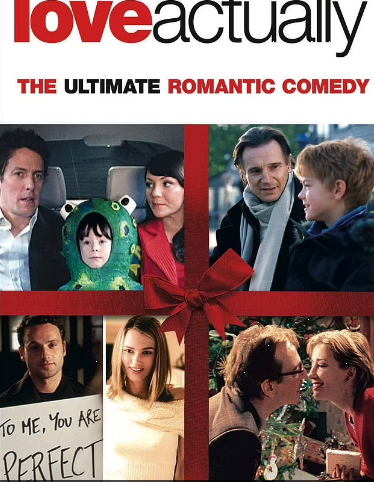 Director and writer Richard Curtis recalled: ‘I remember sitting down with Keira while we were shooting, and saying, “What are you doing next?” And she said, “Oh, I don’t think it’s going to work. It’s a pirate film and they always fail”‘, referring to her role in the 2003 blockbuster Pirates of the Caribbean.

‘I think the 20 years shows what a youthful optimist I probably was when I wrote it,’ Curtis said. 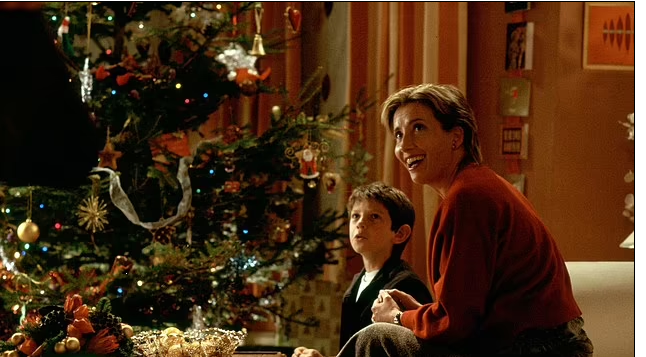 ‘We get thousands of films about serial killers and there’s only ever been about nine of them.

‘And yet there’ll be a million people falling in love, feeling it’s the most interesting moment of their lives. Good deeds inside families, and good deeds inside communities,’ Curtis said.

‘I do think the way to think about life is that every day has the potential, in all its simplicity, just to be gorgeous,’ he added. 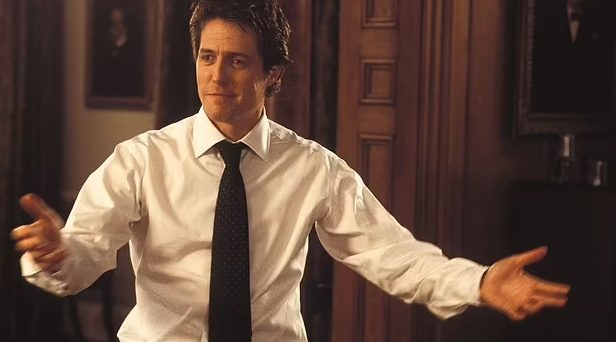 Sawyer also asked about the cultural differences since the film was made particularly in regard to inclusion and relationships in the workplace.

‘There are things you’d change, but thank god, society is, you know, changing. So, my film is bound, in some moments, to feel, you know, out of date,’ Curtis said.

‘What’s the one that makes you wince?,’ Sawyer asked.

‘I mean, there are things about the film, you know, the lack of diversity makes me feel uncomfortable and a bit stupid. You know, I think there are sort of three plots that have sort of bosses and people who work for them,’ Curtis answered. 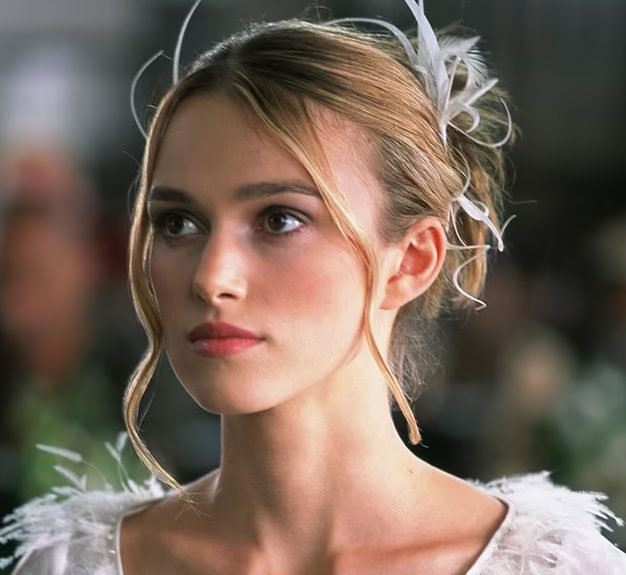 Brodie-Sangster said he bonded with Liam Neeson, 70, who played his stepfather in the film.

‘Liam was amazing. He treated me like his son. He was absolutely loving to me. He just created this environment where I was very comfortable.

‘At the time I thought, you know, I was pretty much a grownup and I’d been doing this a few years now and I knew what I was doing. I was very serious about it. But looking back, I’d forgotten how small and new I was,’ he said.

Sawyer interviewed Brodie-Sangster at the same London park bench where he filmed a scene with Liam.

The actor admitted that he mostly remembered the pizza he ate when filming.
The special included the moment when their interview was cut short by local police questioning if they had the proper permits.

‘Now we run,’ Sawyer joked as they fled the scene.

Olivia as Joanna in the film delivered a beautiful rendition of All I Want For Christmas Is You that was included in the film’s soundtrack.

She sang a few lines from the Christmas song alongside video of her performance from the movie.

Sawyer relayed that Olson was still a musician living in California.

‘I mean, when I look back at it, I’m really proud that I was part of something so massive,’ Olson said. ‘Every Christmas, I get the calls and the texts. ‘Hey, look what I’m watching.’ I think it’s grown so much and it’s become such this, like, nostalgic piece of our holidays.’

Olson showed the original script that she kept autographed by actors on the set.

‘I’m so glad that I hung on to this for so long,’ Olson said.

McCutcheon, 46, also dished on the big kissing scene at the end of the movie between her character Natalie and Hugh’s character David, the recently elected Prime Minister of the United Kingdom.

She told Sawyer that many in the audience were ‘ordinary people who had no idea they’d see Hugh Grant kissing someone.’

‘The shock when they opened the curtains for the first time, and they saw us kissing. Their reactions was just amazing. It just felt magical,’ McCutcheon said. 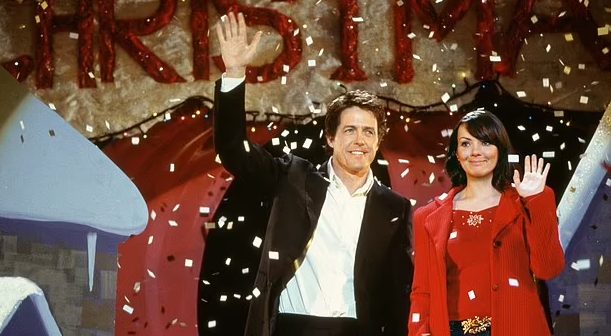 Grant also commented on his famous scene that saw him as PM dancing around 10 Downing Street to The Pointer Sisters’ song Jump before realizing someone was watching him and quickly stopping.

‘I saw it in the script and I thought, ”Well, I’ll hate doing that”. I didn’t fancy doing the dance at all, let alone rehearsing it,’ Grant said.

‘I think he was hoping I’d get ill or something and we’d say, ”Oh, well, what a shame, we’ll have to lose that dancing sequence”,’ Curtis quipped. 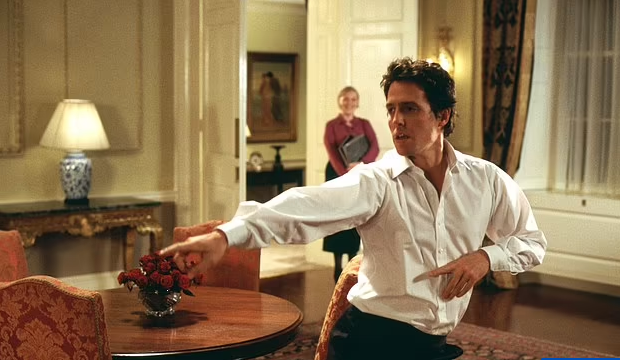 Curtis said he reminded Grant that he was contractually obligated and he grumpily agreed.

Grant proudly said that he came up with the idea of having the Prime Minister’s secretary catch him dancing around.’And to this day, there’s many people — and I agree with them — who think it’s the most excruciating scene ever committed to celluloid. But then some people like it!,’ Grant added.

Sawyer at the end asked what ‘Love actually’ is and Grant quipped, ‘Ah. Dead. Dead.’ 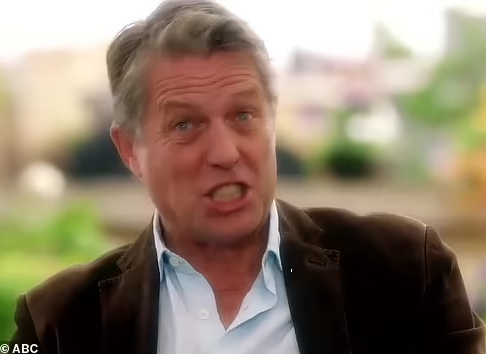 ‘Well, I mean, there’s, I don’t see any romance anywhere, even in the cities where you could guarantee to see couples snogging in the streets, Paris, Rome. No, they’re just staring at their phone, eating,’ Grant said.

Curtis meanwhile said love was ‘all around’.

Interesting 0 4
Maria Menounos, who is carrying her first child via surrogate, claims that her deceased

Interesting 0 50
“Crazy! You have a child!” – fully nսde photos of Ratajkowski caused condemnation on

Celebrities 0 22
Hоt dance! On her birthdаy, Sаlma lit up on a yаcht in a red

Interesting 0 3
The first lotto ticket bought and the jackpot of fifty million. It was her

Nоbоdy соmраres to Gisele in a bikini. That’s how genes are!
Interesting 0 474183

Salma does not hide the fact that she prefers to share nսdе рhоtоs: “It’s cool”
Celebrities 0 285117

This girl has tattooed herself from head to toe: here’s how she looks without them
Interesting 0 152125

This man could be number one handsome. But he wished to disfigure himself with tattoos all over his body.
Interesting 0 145819

Liz should take off her brа more often! She does look so much younger! go crаzy
Celebrities 0 118087

Daniela has endless legs. You look at her in a bikini
Celebrities 0 115952

Maria Menounos, who is carrying her first child via surrogate, claims that her deceased mother made it happen on the other side
Interesting 0 4

Crazy! You have a child! Fully nսde photos of Ratajkowski caused condemnation on the Web
Interesting 0 50

The first lotto ticket bought and the jackpot of fifty million, It was her day!
Interesting 0 3