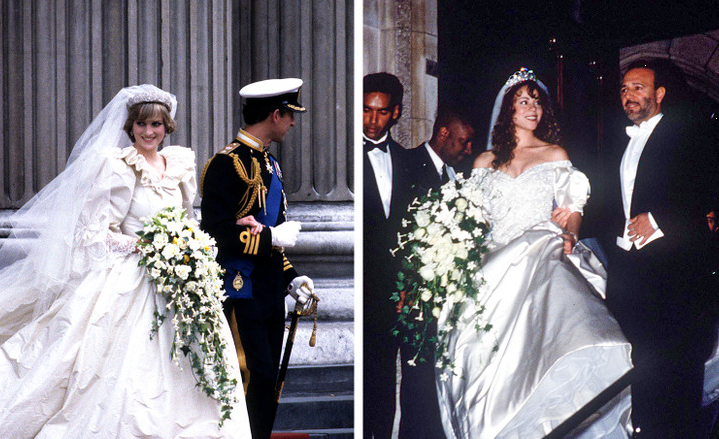 These are the wedding dresses on which the choice of brides from different eras fell. Photo report

When the topic of weddings comes up, the first thing that comes to mind for most people is the bride’s white dress. The dress and the veil have become a symbol of the marriage ceremony. However, it is a relatively recent tradition, whereas weddings have been celebrated since ancient times. Today we found out what brides wore in different times over the centuries.

Up until almost the mid-19th century, brides generally just wore the nicest dress in their wardrobe. No fancy cuts, specific shades, long veils, or other attributes that we’re so used to today. Only a few nations had special attire for weddings.

These were mostly Asian countries. The oldest known wedding dresses belonged to Chinese brides. As far back as the Zhou dynasty (around 1046 B.C.) there was a custom to dress in red and black. The cut of the dress and its appearance may have differed according to the class to which the bride and groom belonged.

It’s amazing how well established this tradition became among Asian countries, as many couples still adhere to it to this day. The only difference is that today’s newlyweds can get more creative with their outfits. But the colors remain the same: red and black.

In ancient Rome, the bride’s main adornment was a long, bright yellow veil. It was a symbol of the light that wives bring to their husbands’ lives. And in ancient Greece, wedding dresses, like those in China, were red with gilded accessories. Often the bride’s look was completed by an ornate belt around her waist.

The fashion for white

With the exception of a few countries, there was no special attire for the marriage ceremony until 1840, when Queen Victoria had her wedding. The ruler of England chose a lavish white dress, decorated with flowers and lace, for the ceremony. Seeing such beauty, all the noble ladies also wanted to wear a white dress on their big day. After that, the trend spread across all classes, and the whole world.

By the end of the 19th century, the white dress had finally become a must-have for the bride. In the 1890s, it was extremely popular to have voluminous sleeves at the shoulders, which tapered at the wrists. The size of the skirt developed into a much more modest shape than that of Queen Victoria’s. This trend continued through the following decades, with the skirt becoming more and more straight.

A revolution in bridal fashion

The 1920s were a turning point for bridal fashion. From then on, brides allowed themselves more daring outfits. Skirts got shorter and dresses were decorated with fringe, sequins, and sparkles. There were no tight dresses, however, only loose-fitting ones. The look was completed by the ultra-long veil, which trailed across the floor.

In the 1950s, brides were finally able to choose their wedding dress from a large selection. This decade saw the opening of specialist salons and shops. The ideal gown at the time had a puffy skirt, falling just above the ankle, like the one Audrey Hepburn wore in her wedding to actor Mel Ferrer in 1954.

As we recall, thanks to Queen Victoria, white gowns became a must-have for every bride. However, she wasn’t the only monarch to influence this fashion sphere. In 1956, Hollywood star Grace Kelly married Prince Rainier III of Monaco in front of thousands of people. With its high collar, lace sleeves and pearls, the image of her wedding dress became a cult classic. To this day, many brides are inspired by the actress’ outfit.

For the next two decades, England’s royalty dictated bridal fashion. Princess Margaret’s wedding was the first royal wedding to be televised and was watched by hundreds of millions of people. Viewers couldn’t help but fall in love with the bride’s unusual attire. Unlike many others, it had almost no decorative elements. The dress accentuated the princess’ figure perfectly, while being strikingly simple.

One of the most high-profile ceremonies of the 70s was the wedding of Elizabeth II’s only daughter, Anne. Lace, inspired by Victorian fashion of the past, was a major trend in this case.

Made from ivory silk taffeta and antique lace, Princess Diana’s gown was the dream of every bride in the 80s and 90s. The train of the dress was over 7.5 metres long and the veil was 140 metres long. It was deliberately made with the idea that it should go down in history and change the way people thought about brides’ attire forever. And so it did.

Thousands upon thousands of women tried to recreate Diana’s image, with celebrities being no exception. Mariah Carey, for her wedding to producer Tommy Mottola in 1993, asked designer Vera Wang to make her a similar outfit.

Several fun wedding films came out in the late noughties. In particular, Bride Wars divided many viewers into two categories: some became supporters of puffy gowns, while others preferred tight ones. But what all these gowns had in common was a minimal number of frills, ruffles, and other embellishments.

For instance, The Big Bang Theory star Kaley Cuoco wore a dress with a similar silhouette to the one worn by the film’s protagonist, for her wedding to tennis player Ryan Sweeting. Interestingly, the designer of the outfit, just like in the movie, was Vera Wang.

Others, like Ariana Grande, preferred tight dresses. The singer appeared on her big day in a white dress with an open back. Curiously, it was also the work of the designer mentioned in the film, Vera Wang.

Throughout the ages there have been brides who have broken the general rules and fashion trends to create their own look. Priyanka Chopra and Nick Jonas, being an international family, had two weddings: one in India and one in America. And for each of the ceremonies, the bride chose a special outfit.

For the Indian ceremony, the actress wore a dress created by 110 embroiderers from Calcutta, who spent a combined total of 3720 hours of work on the dress. Her gown for the American wedding was created by Ralph Lauren. This is truly amazing, as the designer has only made four wedding dresses in his career: three for his relatives, and then one for Priyanka Chopra.

Beyoncé’s sister, Solange Knowles, decided to choose a jumpsuit instead of a dress as one of her wedding day outfits. In addition, the newlyweds asked all the guests to wear white to the reception. Another interesting detail of the event was that the bride and groom arrived not in expensive cars, but on a pair of bicycles.

One of the most memorable wedding outfits of 2022, undoubtedly, belongs to Kourtney Kardashian. For her wedding to Travis Barker, she wore a satin mini dress with a corset inspired by 1960s Italian lingerie. At first, according to her, she was still leaning towards a traditional floor-length skirt. But instead, she decided to surprise everyone. An additional curious detail of her image was a long veil with hand-embroidered flowers and the inscription “Family Loyalty Respect” — exactly like the groom’s tattoo.